For example, when looking at a steel bar, there are several material properties that can be used to describe it, which help us determine exactly what type of steel it is and how it can be used.

It might also be useful to know the stiffness of the bar, which is another mechanical property. In fact, there are many material properties that we might be interested in, depending on how we plan on using the steel bar.

The following is a list of the 10 most important material properties for a mechanical design engineer. If you become familiar with these properties, what they mean, and how to find them, you will be off to a good start when determining which material to use for your designs.

In addition to a brief description of each property, we will give an example of how it might be used to choose between two materials for a specific application. 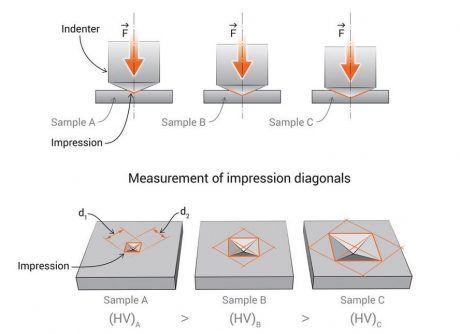 Hardness refers to the ability of a material to withstand scratching or indenting on its surface. It is one of the most commonly used material properties and can be applied to any solid material. Obviously, harder materials are more difficult to scratch or dent.

There are several standard hardness scales and testing methods that can be used. The most common scales are the Rockwell, Vickers and Brinell hardness scales.

A piece of material might be called out as 45 Rc (Rockwell C scale). The hardness is measured using a calibrated machine that measures the force required to put a small indentation in a material sample.

While certain materials will naturally be harder than others (steel will always be harder than aluminium, for example), the hardness of many materials can be increased or decreased by heat-treating or work hardening.

Hardness is extremely useful for a design engineer. For example, an engineer will generally specify a minimum hardness for something like a hammer to ensure that it does not easily scratch or dent when used under normal conditions. However, it may be a good idea to anneal a stainless steel part that will be machined in a later process to make sure it isn’t too hard for the cutting tools that will be used.

Stiffness is another common property, and it refers to the tendency of a material to resist deformation. A highly stiff part will hold its shape under a load, while a less stiff part will be more likely to bend.

Consider a bridge girder that must hold its shape under large loads. A design engineer would want to specify a material for the girder that had a high modulus of elasticity to ensure it didn’t deflect under its expected load.

When heat expansion is an issue, it is important to take into account the coefficient of thermal expansion (CTE) of the materials involved. This property describes how much a part’s size will change with a change in temperature. The higher the CTE, the more the material will grow with every degree increase in temperature.

This is especially important in high-temperature applications like engines, where components must be designed to perform and fit together at the full operating temperature of the engine, rather in the cold condition.

The CTE of dissimilar materials and the resulting increased stress on each component should also be taken into account when sub-assemblies with multiple components will be heated together, for example in a braze furnace.

Another important thermal property is thermal conductivity, which specifies how easily a material conducts heat. Thermal conductivity is normally measured in units of W/m.K (Watts per meter-Kelvin) in SI units, or BTU/hr-ft-degF (BTU per hour-foot-degree Fahrenheit).

Shear strength is the resistance of a material to failure under shear loads. Shear loads are sliding loads in two opposing directions, much like how scissors cut through paper or how a sheet metal shear cuts metal.

This is important when designing components that will undergo shear loads or more commonly to select materials that will survive certain manufacturing processes.

For example, if a sheet metal part will be hydro-formed, it’s important to select a material that will not tear during the process, as heavy shear loads will be applied. For this, a design engineer would select a material with high shear strength (generally a less ductile material). 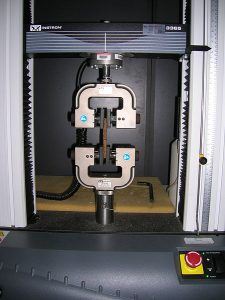 A component that will be under tensile loads (one that will be pulled from two ends) must have a high tensile strength (commonly referred to as ultimate tensile strength or UTS). This is an extremely commonly used property, which is determined in a standard tensile test where a sample is pulled until it breaks, and the load is measured.

Some parts will break suddenly under load with no deformation, while others will show heavy plastic deformation before finally fracturing. The type of failure depends largely on the ductility of the material.

Tensile strength is a factor in all types of applications, including rotating turbine components, which spin rapidly and are under heavy tensile loads due to the rotational speed and heavy component weights.

When designing composite components, compressive strength can often be a big factor. For example, carbon fiber has a very high tensile strength, but buckles easily under compression. For this reason, it is important to be careful when selecting parts that will be compressed, and beware of the directional effects of certain materials.

When under stress, most materials will begin by deforming elastically, meaning that they snap back to their original shape as soon as the stress is removed. At a certain point, however, they will begin to deform plastically, meaning that if the stress is removed, they will not return to their original shape. The point at which a material begins this plastic deformation is known as the yield strength.

This is the critical point in a design that determines at what point the design fails. If a platform is designed to withstand a 500lb load, but yields at 450lbs, the design is flawed, and the platform will fail unexpectedly.

The yield strength of many materials (including most metals) can be changed by work hardening, alloying, and heat treating, and strict sampling requirements are often in place for critical components to ensure that the material will not yield unexpectedly in service. 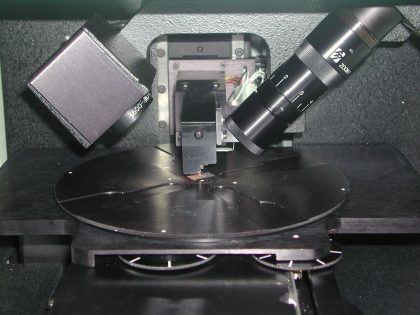 Many manufacturing processes have unique effects on the surface of a part. For example, a sand casting process may leave a part with a sand-papery finish that is rough to the tough, while a honing operation might leave a surface as smooth as glass. To control this, a surface roughness requirement is often called out on engineering drawings.

Specifying a surface roughness limit can also help to control wear, friction, surface cracks, and the ability of a part to be coated, among other things. Generally, roughness is measured with a profilometer, which is a tool that is dragged along the surface of a part.

While there are many surface roughness parameters in use, with some industry-specific standards, the most common is Ra, which is the average of a sampling of values in a given area.

Finally, when designing for high-temperature applications, it is worthwhile to think about the melting point of materials, which is the temperature at which a material turns from solid to liquid.

It is important to make sure that your materials don’t get near their melting point during service or during manufacturing (for example, during furnace brazing).

It is also good to be aware that pressure will have an effect on a material’s melting point, with higher pressure increasing the melting point.

Where to find information on material properties

Most material manufacturers publish data on their products which include all relevant material properties. You can find this information on their websites or request it from your sales rep. Another good reference is the Machinery’s Handbook, which is full of useful information about materials, their properties, and how they respond to various manufacturing processes. Matmatch is also an excellent online source of free information for tens of thousands of materials.