Density is the amount of substance in a unit, per volume of substance. Below you can see the density equation and the table with Milk Density values, including those for whole, semi-skimmed, and skimmed milk, depending on temperature. What makes the question of density per unit of weight tricky, is the fact density changes depending on the temperature and pressure. Additionally, the whole conundrum of the US and the Imperial Gallon makes the simple question of "what is the weight of a gallon of milk" so complicated.

What is the breakdown/density of cow’s milk?

To many people, milk is just a white fluid that has the look and texture of water but feels a little "thicker". In reality, milk can be anywhere up to 90% water with the rest a mixture of proteins, fats, and lactose (milk sugar). However, it is one of the most nutritious foods available and part of the diet of billions of people around the world.

As cow’s milk is by far and away the most popular type of milk in the Western world, we will focus on this when looking at ingredients and density. The exact ingredients in cow’s milk will vary but tend to be in the following range:-

Density of milk: how to correctly calculate it

The basic formula for calculating the density of milk is:

We will use the following figures to calculate the density of milk:-

Therefore the formula is as follows:

You may also see the density of milk presented in a slightly different manner (using the same figures):-

When you mix and match the various elements of milk to create a different formula this will have an impact on the density.

What’s the density of whole milk?

Whole milk’s (producer milk) density is 1.035 kg/L when the temperature is 4.4°C. As the temperature increases so the molecules move further apart and the liquid becomes less dense. While not huge differences, but whole milk at 38.9°C has a density of 1.023 kg/L.

How density aids separation of cream and milk

When looking at the overall density of milk it is worth noting the density of water, fat and so-called solid non-fats. The non-fats have a greater density than water hence they won’t float above the water element of milk while the fat has a lower density than water. This means that the fat globules will float to the top at which point they can be "skimmed" to create two products; skimmed milk and cream.

As the fat globules slowly rise to the surface they create varying degrees of density from the bottom of the milk to the top. When the fat is skimmed off the top of the milk not all of it would be removed which is why skimmed milk is denser than produce milk. In effect, the less dense fat element has been diluted by the removal of the smaller globules which floated to the surface.

How does milk density compare with other liquids?

In order to appreciate the density of milk we thought it would be useful to compare and contrast this with other substances: 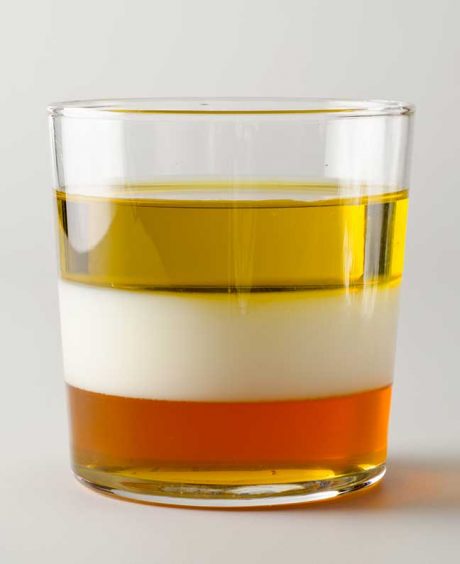 So, while you automatically assume that an ice cube floats on water it is interesting to see that baby oil for example is less dense than an ice cube. As a consequence, if you had a glass of baby oil and placed an ice cube in, it would drop to the bottom of the glass. Eventually, the ice cube would melt and you would have two very distinct layers in the glass. You have the layer of water at the bottom, which is denser than the baby oil, with the baby oil lying above.

When it comes to liquids, density and how they react with each other, we often take things for granted. For example, why does a ping-pong ball float on any liquid when a marble will normally sink to the bottom?

The results won’t surprise you but their density calculations will give you some background:-

When you compare the density of the ping-pong ball it is no surprise that it floats on just about any liquid. On the flipside of the coin, the high density of the marble means that there are very few liquids in which it would float.

What is the weight of a gallon of milk?

How much does milk weigh?

This a tricky question because gallons are measured differently in the UK and the US.

Weight of a gallon of milk (USA):

Weight of a gallon of milk (UK):

So, who would have thought that the density of milk and its various components could be so interesting? We now know why the cream rises to the top, why ping-pong balls float on a liquid and why marbles sink to the bottom. However, when considering density, the ultimate variable seems to be temperature, which pushes tightly knit molecules further apart and therefore reduces their density.