Environmental goals and governmental regulations around the world are resulting in continuous lightweighting efforts and also growing production of electric vehicles. As a result, adequate materials must be sourced, which can provide the high-performance requirements of the modern automotive industry, both for vehicles with conventional internal combustion engines, and especially for new applications within battery electric vehicles (BEVs). These materials must be lightweight, have good mechanical and thermal properties, must exhibit good crash performance and, importantly, must be cost-effective.

One material of choice amongst electric vehicle manufacturers, as well as for conventional automobiles, is cast aluminium. In particular, high-pressure die-cast (HPDC) aluminium alloy parts are increasingly used for car structural parts and are growing their share in battery housings in many current and upcoming EV models.

The limitations of cast aluminium in the automotive sector

HPDC alloy parts, however, have some drawbacks. They cannot be used ‘as cast’, but rather require a lengthy heat treatment, which results in greater production costs. In addition, a subsequent mechanical treatment is required to straighten the components into their original cast shapes.

As a solution, non-heat treatable (NHT) alloys have been developed. These require no additional post-casting heat treatment and can be used as cast. Many of them come, however, with a difficult casting process and a tendency for hot cracking. To overcome this issue, Alcoa Corporation has developed two new proprietary NHT aluminium alloys, EZCast-NHT™ A152 and A153.

These new, improved NHT aluminium alloys are developed for HPDC of complex thin-wall castings for car body components, both for electric and non-electric vehicles.

Properties of EZCast-NHT™ A152 and A153 HPDC alloys

Both of Alcoa’s non-heat treatable EZCast-NHT™ A152 and A153 aluminium alloys exhibit good castability, reduced die sticking and are ideally suited for both HPDC and vacuum die casting (VDC). One of the main advantages is that they require no heat treatment to achieve superior mechanical properties while showing very good resistance to hot cracking.

In addition to the main element aluminium, the alloys contain different % of magnesium.

Some mechanical properties of EZCast-NHT™ A152 and A153 are compared in the following table.

The properties of A152 and A153 NHT HPDC alloys can be compared directly and with other materials using Matmatch comparison feature.

Applications of EZCast-NHT™ A152 and A153 NHT HPDC alloys

Both EZCast-NHT™ A152 and A153 have their main application area in the automotive sector. These include, but are not limited to:

Alcoa Corporation specialises in the production and supply of bauxite, alumina and aluminium. Learn more about Alcoa’s products on Matmatch. 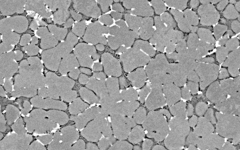 Typical as-cast microstructure in the HPDC NHT alloy (Alloy A152) 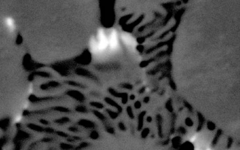 The eutectic microstructure in the HPDC NHT alloy (Alloy A152)

Alcoa Corporation produces and sells bauxite, alumina, and aluminum products. It operates through six segments, Bauxite, Alumina, Aluminum, Cast Products, Energy, and Rolled Products. The company also offers aluminum cast products; and aluminum sheets for the production of cans for beverage, food, and pet food. In addition, it engages in the generation and sale of renewable energy, as well as provision of ancillary services.
https://www.alcoa.com/global/en/what-we-do/aluminum/cast-products/default.asp

Alloys EZCast-NHT™ A152 and A153 are non-heat treatable cast aluminium alloys developed to be used for high-pressure die-casting. Their excellent mechanical properties are achieved as cast, with no additional heat treatment. This makes it possible to reduce the number of production steps and the associated production costs for cast aluminium components.