While regular daily commuting requirements are met with standard tyres, reinforced tyres are fabricated with particular necessities in mind, especially the need to withstand high load pressures that exceed standard levels. Conventional reinforcement for tyres has generally been either made of steel or thermoplastic fibres. Yet, one reinforcement material that has been breaking new ground in the tyre industry is glass cord. What are glass cords? And how do they fare in the tyre reinforcement industry?

Over half a century ago, glass cords began to play a significant role in tyre reinforcement. GoodYear, for example, announced their Polyglas tyre in the late 1960s, which was then a ground-breaking product that included fibreglass belts as reinforcement. It consisted of two plies of polyester cords and two belt plies of glass cords, which enabled the tyre to have better traction, slip resistance, and less squirm. This increased the tyre’s mileage two folds and significantly enhanced its road-holding capabilities.

By definition, reinforced tyres are tyres that are modified to endure higher loads and pressures compared to those that standard tyres of a given size can tolerate. In other words, they have a greater load capacity as they are designed to maintain higher air pressure inside the tyre. The benefits of reinforced tyres are observed in longer tyre lifetime, higher durability over a longer total distance – particularly under intensive use – higher resistance to mechanical damage, improved traction, and better stability against additional motion-induced loads. However, they tend to produce more noise and may result in higher fuel consumption as they have increased tyre thickness and tyre mass. For that reason, reinforced tyres are utilised in specific application areas that require high load capacity.

The materials used in reinforced tyres vary depending on the desired tyre properties and applicability of such materials. The commonly used materials include steel cord fabric and thermoplastic polymer fibres (like polyester, nylon, and aramid). One alternative material that has been increasingly utilised as reinforcement for tyres is glass cords.

Glass typically has superior stress/strain properties than other reinforcement materials and is, in fact, stronger than steel for equal weights. Compared to other fibrous reinforcement materials, glass fibres prevent stretching and have high elastic modulus, excellent moisture and chemical resistance, and good dimensional stability. They also exhibit great strength with high levels of fatigue resistance when impregnated.

A glass cord consists of glass fibres bundled together, each coated with an adhesive latex material (such as Resorcinol Formaldehyde Latex, or RFL). It is usually 80% glass fibre and 20% latex. Coating is done by passing the fibres through a bath of rubber latex and crosslinker material. This unique aspect, particularly when compared to thermoplastic polymer cords, enables protection of fibres against interfibre abrasion during fatigue. The latex coating also allows for the maximum distribution of load between the fibres when the cord is under high local stresses.

Typically, glass cords are made of 1600 10-micron E-glass filaments, which are alumino-borosilicate glass, the most common type of glass fibres. The strands of filaments are coated with latex, which is crosslinked into a matrix around and among the fibres. They are, then, twisted to increase the cord’s flex fatigue resistance.

The coating material has excellent adhesion properties to rubber compounds used in tyres, such as natural rubber (NR), butadiene rubber (BR), and styrene-butadiene rubber (SBR). Moreover, the linear stiffness of the cords increases proportionally with cord diameter, so material selection is made easier by focusing on cord construction. For example, two strands twisted together would provide double the linear stiffness, which makes them applicable in lightweight, low heat build-up tyres. Glass cord 601/602 by NGF, for instance, are highly saturated nitrile overcoated E-glass cords that are used in reinforced tyres. They have a diameter of 2.3-2.7 mm and a twist per meter of 32-48 TPM. They also have a cord construction of 330.3/5, which is characterised with low strain even under high forces. 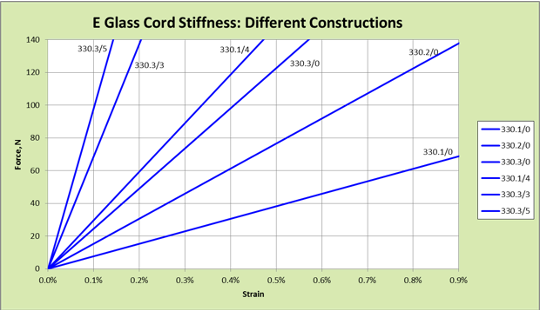 The different types of cords

In addition to E-glass cords, there are various types of cords that meet different requirements. These include high-tensile-strength glass (HTS), carbon fibres, and hybrids.

HTS glass fibres are characterised with higher strength and higher melting points than the regular E-glass fibres and are available as thin bundles of fibres. K-glass and U-glass (also known as S2 glass), for example, exhibit high fatigue resistance and extended lifetimes, exceeding a million km of tyre usage. Examples of K-glass and U-glass include Glass cord 041/042 and Glass cord 061/062, respectively. Their smaller filament diameter (~ 7 microns) allow for a finer balance of stiffness and diameter when bundled together as compared to thicker strands.

Carbon fibres are famous for being lightweight and having high strength. They are 25% lighter than glass fibres, and despite not being highly extendable, they have a remarkable fatigue life, especially against linear tensile stresses.

In addition, different fibre types can be combined and twisted together to make up hybrid fibres. This enables the separation of fibre position and function. For instance, NGF technologies have shown that carbon fibres at the cord centre would be able to carry linear tensile loads and have low bending strains while being surrounded by impregnated glass fibres, which would contain higher bending strains in the outer sections of the cord. Such a hybrid exhibits lower internal stresses than any of the constituent cord types individually.

To further understand the performance of each type of cords, Table 1 below shows a comparison of the tensile properties of different cord materials. Notice the significant increase in tensile modulus and decrease in strain with glass and carbon cords as compared to polyester.

The value in particulate fillers

Cords can also be used in smaller structures, in the form of particulate fillers, as they can be chopped into smaller pieces and dispersed uniformly throughout the compound. Aramid fibres from NGF, for example, are treated, chopped, and impregnated with a latex material. Other materials, like carbon fibre and E-glass, can also be chopped and impregnated to provide a uniform and reliable reinforcement to rubber tyres. The difference in uniformity of dispersion between NGF’s rubber impregnated chopped aramid fibres, aramid pulp, Kevlar, and Twaron when added to a chloroprene rubber (CR) compound, is shown in the figure below. 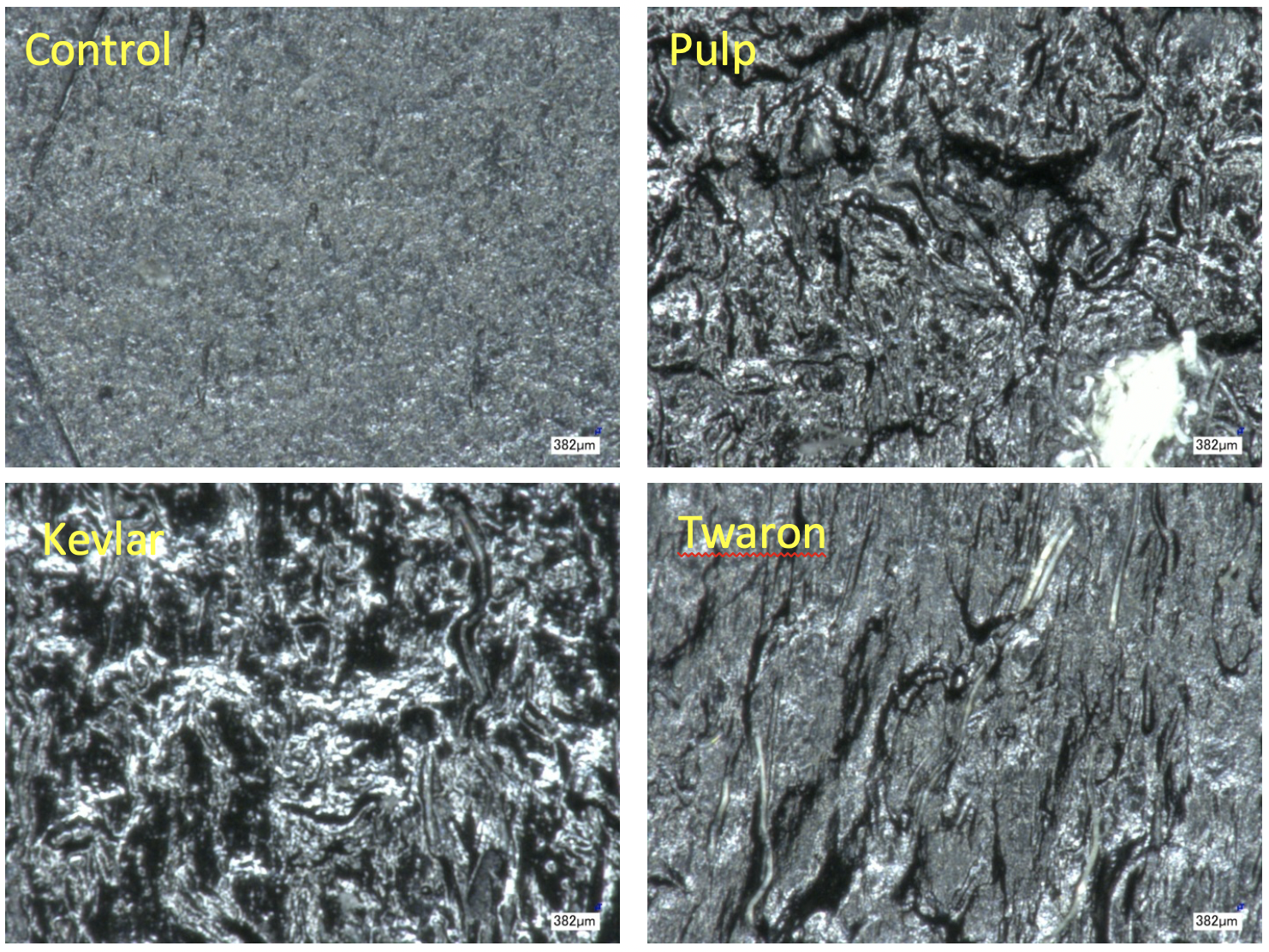 Figure 2. The uniformity of dispersion of aramid fibres (control) in a CR compound as compared to aramid pulp, Kevlar, and Twaron. (NGF)

Chopped fibres can be prepared in two different forms, linear and planar particles. Linear particles are impregnated fibres that are chopped into various small-length pieces. They are usually chopped in bundles of 1600 filaments coated with latex, and then dispersed into other 10-micron glass fibres. The latex offers strong mechanical coupling between the fibres and the matrix. Planar particles, on the other hand, are high-aspect-ratio particles with large area and small thickness. Typically, they have a width of 300 microns and a thickness of 2 microns. They are highly effective in reducing permeation at high loadings.

In addition to that, with such particulate fillers, engineers are able to adjust the orientation of many dynamic and viscoelastic properties. This anisotropy allows for the optimisation of properties like rolling resistance of the tyre for the required orientation while leaving the other orientations to maintain grip and traction.

How to find glass cords?

As glass cords and hybrid cords have become an effective alternative to steel and polymer cords as tyre reinforcement materials, especially E-glass, HTS glass, and carbon fibres, it is very important that engineers and product designers find such materials easily and be able to compare them clearly with other materials.

NGF, a wide-reaching supplier of specialised glass cord and flake products, has always made sure to be at the forefront of glass design, manufacture, and marketing. Their extensive portfolio of glass cord and chopped fibre materials is now available here on Matmatch.

Visit the NGF supplier page for more information on their materials listed on Matmatch and to get in direct contact with them.

NGF is a global business with manufacturing units in Japan, China, UK, Poland and Canada and is a member of the NSG Group of companies. The group is a world leader in the manufacture of glass products for building, automotive and information electronics applications.

NGF is at the forefront of the design, manufacture and marketing of specialised glass cord and flake products that are used in a variety of industries worldwide.