Molybdenum coatings are essential in the thin-film transistors used in TFT-LCD screens and provide immediate control of the individual image dots (pixels). With that, a particularly sharp image quality is ensured. Other than that, Molybdenum layers are used in CIGS solar cells as back contacts.

The magnetron sputtering method is based on the vaporisation of tiny metal particles from the sputtering targets which are subsequently deposited as a thin film on the glass substrate. This is a fast and economical coating process. Of course, all materials must meet the highest quality criteria.

For more than 20 years, Plansee materials have been applied as thin films in TFT displays.

Plansee offers both single and multi-piece planar & rotary targets which will be bonded in-house. Besides, Plansee produces sputtering targets for all commonly used systems as well as to individual customer needs.

The key features for the films are:

Plansee guarantees a purity of at least 99.97% for their molybdenum targets. On average the purity of Plansee's targets reaches even an unbeatable 99.99%. Moreover, the typical oxygen content is as low as 6 ppm.

Like this, Plansee helps to ensure that every pixel in the TFT-LCD display can be controlled precisely and that the CIGS back contact functions correctly.

Due to their special forming processes, Plansee's molybdenum sputtering targets reach a density of almost 100%, leading to a faster process due to increased sputtering speeds. The higher the molybdenum target density, the higher the conductivity of the created layer. 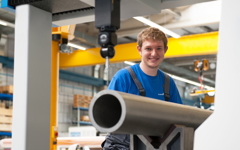 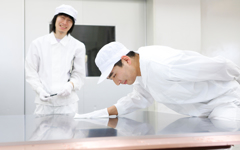 Plansee is entirely focused on producing, processing and marketing refractory metals such as tungsten, tantalum and molybdenum. These are the most heat-resistant metals. With their high melting point, they are suitable for use as heaters in high-temperature furnaces or as incandescent filaments in lamps. In electrical switch contacts, they are valuable because of their excellent electrical and thermal conductivity. In electrically conductive film in flat screens and solar cells, our alloys are remarkable for their low coefficient thermal of expansion. In this way, they bring astonishingly sharp image quality to our living rooms and provide us with clean energy.
https://www.plansee.com