Solid-State Electrolytes and Their Use in Batteries, Fuel Cells, and Electrolyzer Cells 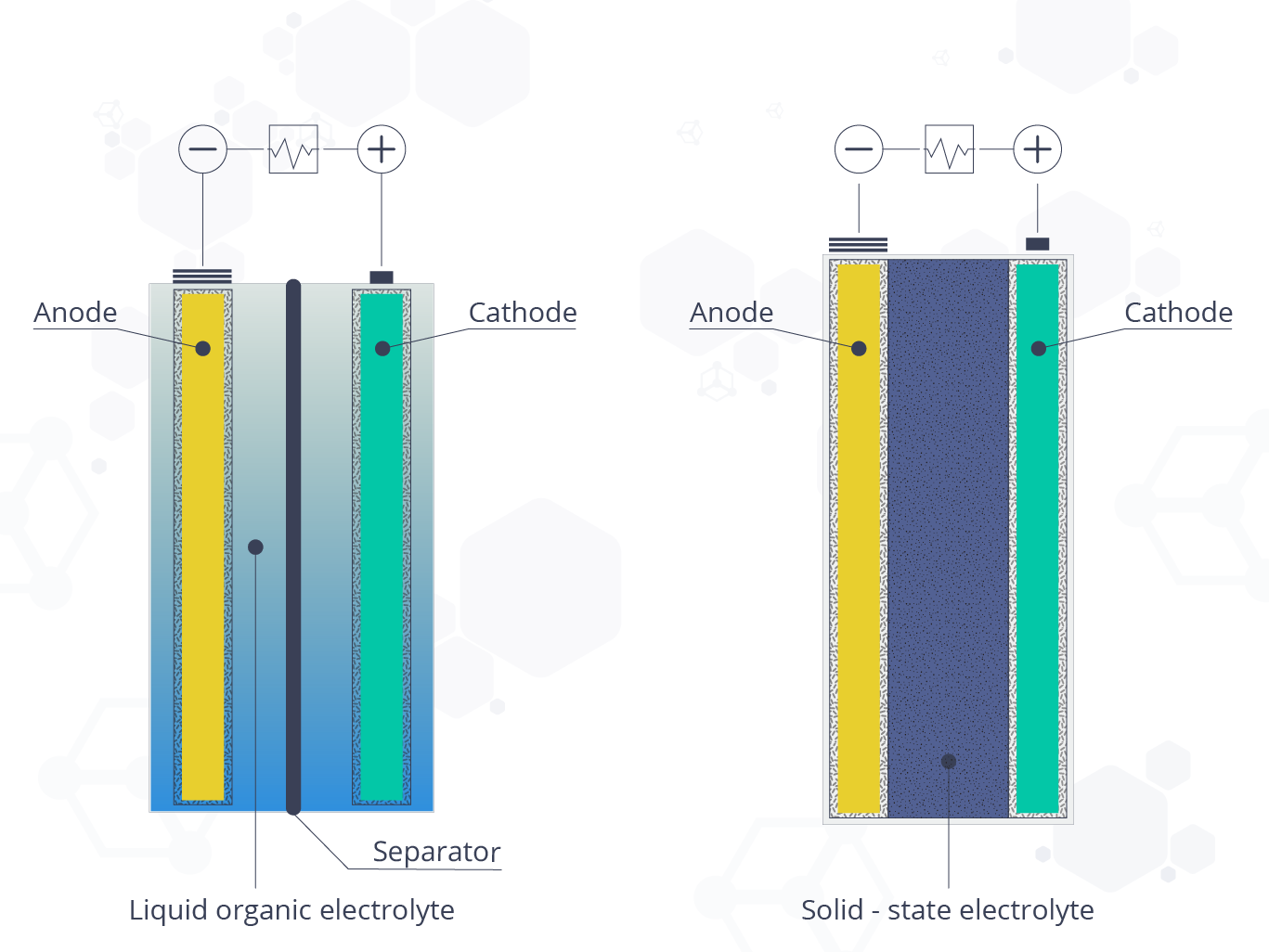 Solid-state ionic technologies have been a hot topic for decades, from energy generation to safety all the way to sustainability and environmental considerations. Solid-state batteries, solid-oxide fuel cells (SOFCs), solid-oxide electrolyzer cells (SOECs), and supercapacitors, to name a few, are examples of how expansive and vital the industry of solid-state ionics is.

Solid-state batteries, for example, promise both increased energy density and greatly improved safety compared to conventional lithium-ion batteries. SOFCs can deliver over 80% energy efficiency while other fuel cells can achieve typically 40-60%. In addition to that, SOECs have developed into strong contenders as a technology that can play a vital role in ensuring sustainability. An important part of this is owed to the materials of which these systems are made, particularly their electrolyte materials. Solid-state electrolytes have been investigated for a long time, especially because they can provide significant advantages in design, structure, operational capabilities, and long-term stability.

What is a solid-state electrolyte?

A solid-state electrolyte is a conducting substance that is solid by nature and shares the same functionality as the traditional liquid electrolyte. Solid electrolytes are distinctive as they enable systems to be designed more compactly with better strength and resistance properties.

In general, SSEs can be either inorganic or organic (solid polymer) electrolytes, based on their intended use and processing techniques. Inorganic electrolytes such as single crystals, polycrystalline compounds and amorphous compounds have been investigated for quite a long time, dating back to 1967, when the β-alumina solid electrolyte (BASE) was discovered to exhibit high conductivity of Na+ ions. More recent research studies are also looking into combining these materials to achieve the best properties as composites.

SSEs are processed through appropriate techniques that allow the formation of an electrolyte layer, including sintering of powder oxide materials and compression molding. Despite having a typical ionic conductivity that is somewhat lower than that of liquid electrolytes, solid electrolytes provide their systems with several key advantages. These include high safety levels, simple yet strong structures, high reliability, increased stability, and extended shelf life. Table 1 below shows the main properties of an effective SSE.

Table 1. The key properties of a good solid-state electrolyte.

Figure 2. Picture of LALZ powder prepared by spray pyrolysis. (left) Crucibles with powder and pellet samples before calcination with Li excess of 0.15 and 20 mol%. (right) Characterization of Li6.75Al0.25La3Zr2O12 with 30% Li excess by XRD. The * marked peaks show the presence of Li2CO3 phase.

Solid-state batteries are typically batteries that employ both solid electrolytes and solid electrodes to operate, as compared to lithium-ion batteries’ liquid organic electrolytes. SSEs are simultaneously used as electrolytes and separators, replacing other bulky components and leading to more compact designs. As this technology is closing in on mass production, it continues to attract a lot of attention and investment with an expected market size of $6 billion by 2030.

Conventionally, liquid-electrolyte-based batteries, such as Li-ion batteries (LIBs), have been quite successful since their commercialization in 1991. However, several key drawbacks have become apparent, which sparked the race in battery technologies. These drawbacks include:
•    Safety and health concerns due to the presence of inflammable and corrosive liquids
•    Limited effective conductance due to the formation and instability of the solid electrolyte interface (SEI), which is caused by electrolytes decomposing at the anode
•    Limited freedom of design due to required components such as a separator membrane between the electrodes and an impermeable casing to prevent leakage
•    Insufficient thermal and electrochemical stability of liquid electrolytes and low ion selectivity

In addition to that, and with the ever-growing field of battery applications, technologies like LIBs seem to fall short of satisfying the increasing demands, particularly those of power density and safety.

Comparatively, solid-state batteries have presented a strong case to address these issues, in particular when used in the markets of wearables, drones, and electric vehicles. With SSEs, batteries can be made thinner, more flexible, and more energy-dense than LIBs. At the same time, SSEs are relatively stable and can hinder the formation of SEI films, thus enhancing the battery’s cycle performance. SSEs are also non-flammable and non-leaking, eliminating most safety concerns.

Such properties are, generally, a result of the nature of the electrolyte itself. Many SSEs are made from advanced ceramic oxides that allow them to perform effectively. For instance, fine powders developed by Norway-based manufacturer Cerpotech have high chemical and phase purity and high homogeneity that enables them to be utilised to make SSEs with excellent properties. One example is lithium lanthanum zirconate-based (LLZ-based) ceramic oxide powder, which has a chemical purity of over 99%. The spray pyrolysis as manufacturing method is very flexible in terms of compositions and allows the addition of dopants in various amounts and numbers giving high homogeneity and quality of powders. Cerpotech also produces cathode materials for solid-state batteries, such as lithium cobalt oxide (LiCoO2) powder.

A solid-oxide fuel cell is another electrochemical system that utilizes solid-state electrolytes to convert chemical energy into electrical energy. It works quite similar to a battery, but unlike the battery, it relies on the supply of fuel, e.g. hydrogen, methanol, natural gas, etc…, without running down or requiring any electrical charging.

Not only are fuel cells eco-friendlier and more efficient than combustion engines, but SOFCs also have a significant superiority in efficiency (> 80%) over other fuel cells (40–60%), as they can harness the thermal energy released from the energy conversion. SOFCs can also circumvent electrolyte management problems that are associated with liquid-electrolyte fuel cells, such as phosphoric acid fuel cells (PAFCs) and molten carbonate fuel cells (MCFCs).

Furthermore, SOFCs operate at high temperatures typically exceeding 800 °C, or as intermediate temperature SOFCs (IT-SOFCs) at temperatures ranging between 500 °C and 800 °C. IT-SOFCs have been developed to solve the issues that arise with high temperature (e.g. thermal expansion, chemical diffusion, electrode sintering), which can significantly affect the fuel cell’s performance.

The most convenient electrolytes are usually dense ceramics that can be used at high temperatures, such as barium cerium yttrium zirconate (BZCY811). The cathode is made from perovskites, such as lanthanum strontium manganite (LSM73), which is usually supplied as fine, submicron powder. On the other hand, the anode is made from composites of nickel and zirconia-based (Ni-YSZ) ceramics or barium yttrium zirconate nickel oxide composite (BZY15-Ni40w). Other powders produced by Cerpotech that are used in SOFCs include ceria, gadolinium-doped (CGO82) powder, lanthanum strontium manganite (LSM55) powder, and barium zirconium yttrium cerate nickel oxide composite (BCZY721-NiO60w) powder. Composites between Lanthanum strontium cobalt ferrite (LSCF) and ceria gadolinium-doped (CGO) powders are also possible to manufacture with very homogeneously distributed phases in one step by spray pyrolysis.

Figure 3. Advanced ceramic-oxide materials are used in the various layers of a fuel cell. The figure shows (left) the principle of SOFC, (middle) the cells prepared by Elcogen, and (right) the stack of cell prepared by Elcogen that goes into the unit.

Of all fuel cells, SOFCs have the highest operating temperature range. They also have a high tolerance to impurities thanks to the nickel anode’s catalytic properties. SOFCs come in either tubular or planar geometries, each with its own benefits. Tubular SOFCs provide easier sealing and better thermal shock resistance, while planar SOFCs offer easier manufacturing and better power density.

Another important application area for solid-state electrolytes is the solid-oxide electrolyzer cell. A SOEC is simply a SOFC in reverse. In other words, it is an electrochemical system that utilizes electricity to generate hydrogen. It can also electrolyze carbon dioxide to carbon monoxide, and when done together with water electrolysis, a mixture of hydrogen and carbon monoxide, called syngas, can be generated.

SOECs, generally, operate at elevated temperatures between 700 °C and 1000 °C with significantly high efficiency. Such high-temperature electrolyzers have been named steam electrolyzers (HTSEs) as they use steam as their feed material. They also consume about 35% less electricity than conventional electrolyzers to split water.

Not only do SOECs have a great potential to produce hydrogen fuel efficiently and economically, but they also can help make fuel usage carbon neutral, and that is by using electricity generated from renewable resources, such as wind turbines and solar cells. Hydrogen generated from SOECs may also be stored in fuel cells for later to be reconverted into electricity during periods of high consumption or lack of energy from other sources.  Evidently, SOECs have the potential to be part of a sustainably developed future given their ability to recycle carbon dioxide into useful fuels or materials.

Similar to solid-oxide fuel cells, steam electrolyzers come in planar or tubular designs, with the former providing better electrochemical performance and manufacturability. They also make use of efficient materials for their electrolytes and electrodes. Barium yttrium zirconate (BZY20) is a promising material for high-temperature electrolytes, while lanthanum strontium gallium manganite (LSGM) is used for rather intermediate temperatures. Anodes are usually made from lanthanum strontium cobalt manganite (LSCM) or LSM-YSZ, whereas cathodes are made from nickel-based YSZs or barium yttrium zirconate nickel oxide composite (BZY15-Ni).

Solid-state electrolytes are clearly part of a bigger solution to many of our energy, safety, and sustainability problems, but they are a vital factor, nonetheless. Manufacturers and material producers are keen on providing the most effective materials for engineers, researchers, and product developers to utilise in developing efficient solid-state ionic technologies.

Cerpotech is a powder manufacturer specialized in producing advanced ceramic powders for functional materials, such as SSEs. They synthesize high-quality custom ceramic powders through a unique, environmentally friendly production process called spray pyrolysis. This process enables them to produce powders with extremely high purity (> 99%) and remarkable homogeneity in chemical composition. Moreover, with water as a solvent and 100% green electricity, their annual production of several tonnes of powder has extremely low CO2 and NOx emissions, as they are keen to play their role in ensuring a sustainable future.

In addition to that, Cerpotech has joined Matmatch by digitizing their impressive powder materials in order to help engineers source and compare powders that could be useful in their academic or industrial applications.
Visit the Cerpotech supplier profile for more information on their powders and to get in direct contact with their representatives.

Cerpotech is specialized in the production of advanced ceramic powders for functional materials. Our production capabilities include customized batches for R&D purposes as well as ton-scale supply of powders for industrial production.  With our unique production process, we synthesize high quality ceramic powders that are tailored to the specific processing requirements and end-product functionalities of our customers. Thereby, we enable our customers and partners to develop and produce innovative products in many different technology fields. The main applications are:   • Energy – fuel cells, electrolysers and batteries • Environmental – membranes and catalysts • Electronics –electroceramics and lead-free piezo materials  Cerpotech is located in Trondheim, Norway. Our company was founded in 2007 at the Norwegian University of Science and Technology. We are a highly-qualified team that would like to support you all the way from your research projects to your production activities.