Tungsten is an important and rare metal with a concentration in the earth’s crust of about 1.5 parts per million (ppm). Due to its unique combination of mechanical and thermal properties, tungsten is considered a valuable material that must be sustainably managed and utilised.

Fortunately, tungsten scrap metal is, on average, richer in tungsten than its virgin ore, making recycling tungsten economically sensible, more so than mining and refining it from scratch. Every year, about 30% of all tungsten scrap is recycled, pointing to its high level of recyclability. Yet, there remains substantial room for improvement in the recycling process.

Tungsten has been recycled for decades, and the recycling processes have evolved to the point that tungsten can be extracted from virtually all tungsten-containing scrap. However, how effective, energy-efficient and sustainable these processes are is a different matter. With the ever-increasing demand for tungsten and consequently the increased focus on mining and recycling it, it is important to consider ways of doing this sustainably to ensure the continuous availability of tungsten for future generations. 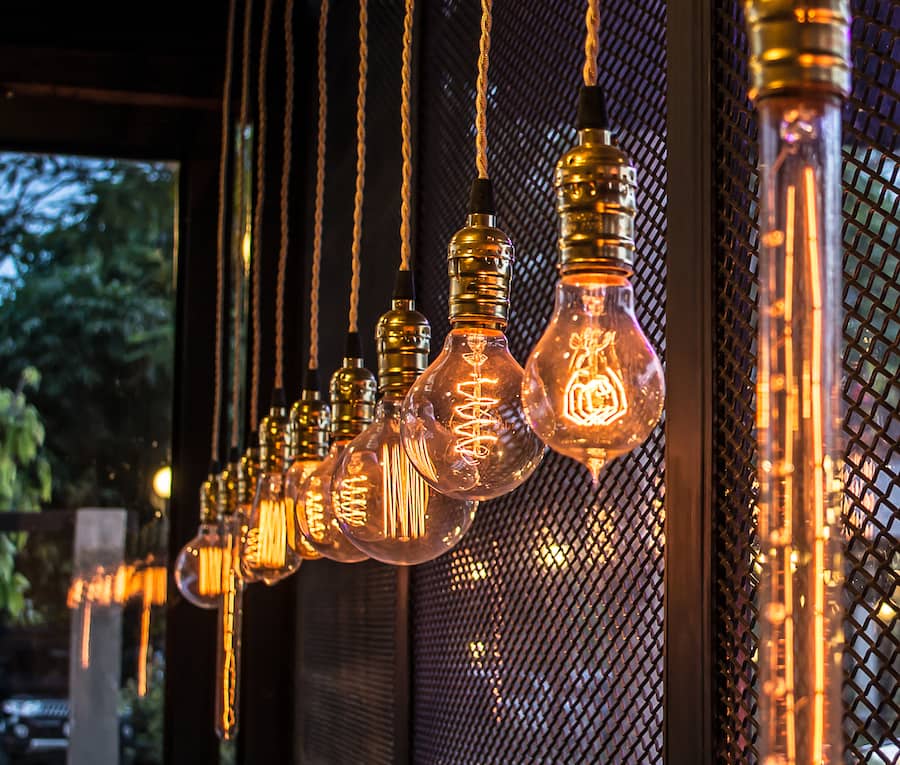 A tungsten filament is core to an incandescent light bulb.

Firstly, it is necessary to understand what tungsten is and how it is produced.

Tungsten is one of the hardest metals in existence, and it is even harder as a carbide. Tungsten carbide is the most common form in which tungsten is used, but it is also used in its sulfide form or as an alloy with other metals.

This dense metal has the highest melting point of all elements and the lowest coefficient of thermal expansion among metals, which is why it is used as filaments for light bulbs and similar devices. It is also used widely in automotive and aircraft manufacturing, electronics, oil exploration and defence [1].

The two primary natural sources of tungsten are wolframite [(Fe,Mn)WO4)] and scheelite (CaWO4). They are also the only minerals that are economically viable for the commercial production of tungsten. Other naturally occurring ores of tungsten, such as alumotungstite, tungstenite, and sanmartinite, are much rarer, ruling them out economically as options. Therefore, tungsten extracted from scrap is essentially the third major source of the metal asides from wolframite and scheelite [1].

Tungsten ore is surface- or underground-mined depending on its location in the earth. Its extraction from its primary ores, wolframite and scheelite, is done industrially via a process developed by Juan Jose and Fausto Elhuyar, which consists of the following steps [2].

The ores of tungsten retrieved from mines are crushed and milled into a slurry, which is easier to process.

The ore is then concentrated by either gravity, air blast separation, froth flotation, magnetic or electrostatic separation, or a combination of these methods depending on the type of ore being processed. The concentrate at this point would contain at least 65% of tungsten trioxide.

First, the resulting ore concentrate (65 - 75% tungsten trioxide) is digested by sodium carbonate pressure leaching (for scheelite) or by sodium hydroxide (for wolframite or a wolframite-scheelite mixture) to produce a sodium tungstate solution. This process is carried out from 190° C to 230° C.

At this stage, the APT is heated and reduced in the presence of carbon or hydrogen to produce the desired tungsten metal along with carbon dioxide (CO2) or water vapour (H20), respectively [2]. This process takes place at temperatures over 1925 °F (1050 °C).

Depending on the temperature and atmosphere of the rotary furnace, the calcination of APT produces intermediate oxides of tungsten, namely, tungsten oxide, tungsten dioxide or tungsten trioxide, which are purple-blue, brown and yellow, respectively. Temperature ranges for this process are from 550 °C to 1050 °C. Temperatures over 1050 °C will completely reduce all three of the oxides into pure tungsten metal power, which is usually, at least, 95% pure.

During tungsten production, tungsten-containing byproducts called “new scrap” are generated, and the processes to recover this tungsten have been perfected over time. The major challenge now lies in extracting tungsten from “old scrap”, which are tungsten products that have reached the end of their service life and have been collected to be recycled.

The need for recycling tungsten is apparent due to its rarity. While some of these recycling processes have been around for decades, most are tailored for specific compositions of tungsten scrap and the forms (powder, sludge, carbide burrs, worn drill bits, etc.) in which they come in.

Cutting tools represent the largest share of tungsten carbide at 55%, and the biggest producers of tungsten carbide cutting tools, such as Ceratizit, actively partake in tungsten recycling. They ensure efficient sorting and collection of scrap by entering into partnerships with their customers who can return/resell their used and worn out products back to them for recycling through buy-back programs. 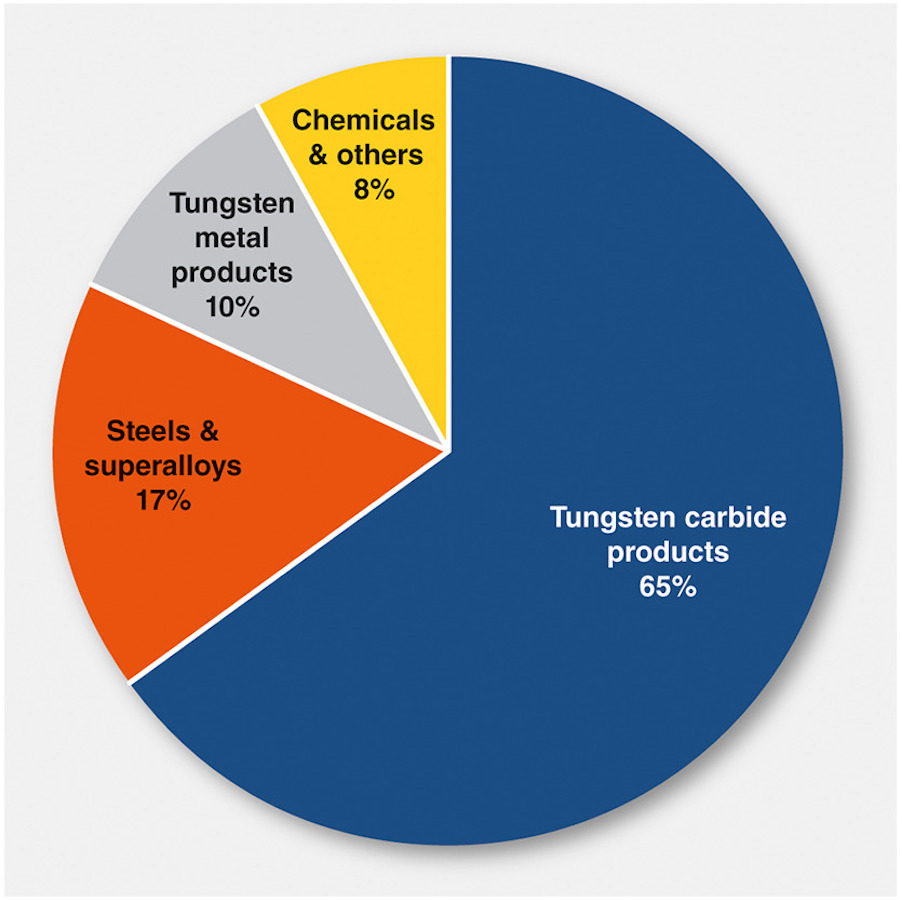 It is important to note that recycling tungsten does not necessarily require that the end product be pure tungsten. It may remain an alloy or a compound with a tungsten constituent. The type of scrap and the desired end product determine the type of recycling process it will be subjected to.

Types of scrap may be categorised into hard scrap or soft scrap. Hard scrap has a significant amount of impurities (cemented carbides, metal turnings, etc.), while soft scrap requires little to no refinement (mainly grinding swarf from metalworking industries). The desired end use may be as pure tungsten powder or in the same chemical composition as the scrap material but a different physical form.

There are three major methods of recycling tungsten:

This form of recycling does not change the chemical composition of the scrap material but converts it into powder form. Prerequisite conditions that must be satisfied to use this means of recycling include the acceptability of powder as the end product of the process, the supplied material being of very high purity, and a low chance of contamination during the process.

The process itself can be done via chemical or physical treatment. Examples of direct recycling processes include:

Recycled scrap is generally more amenable to the process than virgin ore due to the absence of detrimental elements, such as phosphorus or arsenic.

Also, unlike the direct recycling method, the indirect method is suitable for the widest variety of tungsten scrap compositions. It produces tungsten in a form that can be used for numerous other applications different from its original usage before becoming scrap.

This is perhaps the least favourable method of recycling tungsten because once this route of recycling is taken, it will become the only method for subsequent recycling.

Depending on the desired end product, the required purity of the scrap is chosen, added to and melted along with a charge of primary material, usually steel. Superalloys and stellite require high purity scrap, while steel products do not, as their impurities mostly end up in the slag and are easily separated. 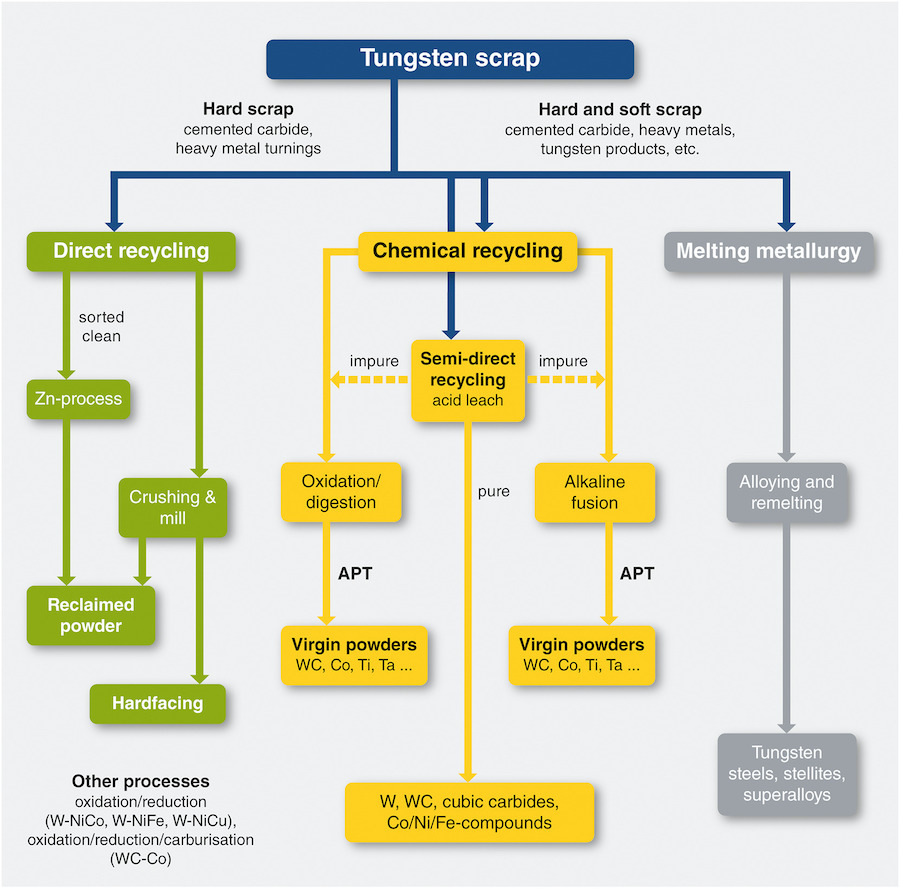 Tungsten’s impact on the environment and its sustainability

Tungsten does not occur in its metallic form in nature, and it poses no known toxic effects to the environment in its naturally occurring states. Aside from continuous occupational exposure in high concentrations, tungsten poses little to no risk to humans, animals, microorganisms and plants.

However, in concentrations over 1% by weight, pure tungsten powder has been shown to significantly increase the acidity of soil and negatively impact its microbial ecosystem. The death of bacteria, plants and red worms has been linked to increased tungsten concentration in the soil [4].

It is the production of other toxic waste as a direct result of the mining and processing of tungsten that is a cause for concern. These waste products may include other heavy metals such as lead, arsenic and zinc in tungsten tailings and acid mine drainage from tungsten tailings storage. They pose significant environmental risks if not disposed of properly. They could cause organ damage, even in low concentrations and some studies point to them being carcinogens.

In addition, they can affect the ecosystem by being transferred up and down the food chain, affecting every living thing they come in contact with [5]. However, the usage of recycled tungsten scrap can mitigate the introduction of these harmful elements into the environment since tungsten scrap is usually of higher purity than its ore and generally do not contain these heavy metals to begin with.

There are currently no official guidelines on tungsten pollution in the USA or the European Union, and literature on tungsten toxicity to the environment and the ecosystem is limited. However, the International Tungsten Industry Association (ITIA) has published hazard classifications on selected major tungsten compounds [1].

Recycling, in itself, has many benefits when compared to mining and refining tungsten ores, but recycling also involves processes that may not be sustainable upon which improvement is needed. For example, the reduction of APT into metal tungsten produces carbon dioxide which is the primary greenhouse gas. 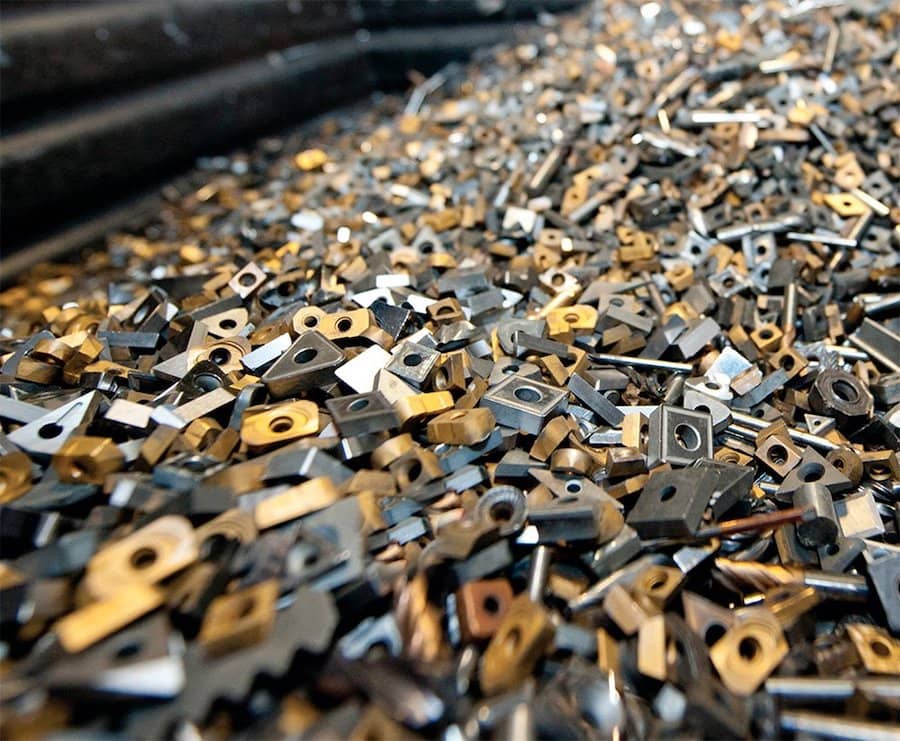 Is tungsten a conflict mineral?

Tungsten is one of four minerals called conflict minerals. These minerals include tungsten, tantalum, gold and tin, also referred to as 3TG. Tungsten is a conflict mineral because its mining and trade are said to directly finance armed conflicts or contribute to human rights abuse through forced labour in countries that supply the ore. Such countries include Vietnam, China, the Democratic Republic of the Congo, etc. Therefore, these metals and their derivatives are considered conflict materials since their sources are conflict minerals.

There are attempts globally to regulate the trade of these minerals so that they do not negatively affect the citizens of the countries where they are found. For example, the European Union enacted new regulations called the Conflict Minerals Regulation in June 2017, which came into effect in January 2021. It aims to ensure that importers of 3TG minerals follow due diligence and import these minerals from conflict-free sources only and follow the guidelines and standards set by the Organisation for Economic Co-operation and Development (OECD).

The regulation directly affects up to 1000 importers of these metals located in the EU. But it also affects companies elsewhere indirectly as the EU-based companies will only be able to conduct business with foreign companies that follow similar due diligence and share similar values.

However, recycled tungsten and tungsten scrap are not subject to the above regulation as it is logistically impossible to document all their original sources. They are therefore considered “DRC conflict-free” and require no additional due diligence.

Technically, this means that recycling tungsten by using tungsten scrap is more favourable from a logistics point of view as it eliminates the cost of compliance efforts [6]. Therefore, it is to be expected that if primary sources of tungsten are regulated properly, the secondary sources would also indirectly comply with the regulations.

Tungsten inserts in cutting tools like those for the transport end-use segment are easy to collect and recycle (Courtesy of CERATIZIT and Wolfram Bergbau- und Huetten AG) [3].

Current trends indicate that tungsten will remain in high demand for the foreseeable future. Therefore, the optimisation of current processes or the development of new processes to extract and recycle tungsten will become increasingly important. Cost- and energy-effectiveness and minimising the negative impact on the environment (both physically and socially) will be the guiding principles of this endeavour. These are the challenges that must be overcome on the road for tungsten to become a truly sustainable material.

If you enjoyed reading this article, you can read more related content here:

Materials For The Reinforcement Of Composites In General