What is Fatigue Strength?

Materials have been known to fail in service under repetitive stresses that are much lower than their tensile strength. It’s estimated that about 90% of mechanical failures of materials in service are caused by or at least contributed to by fatigue. Therefore, fatigue is an important parameter to consider for moving mechanical components that are expected to last for long periods [1].

Fatigue has been recognised as a problem since the early 1800s, where catastrophic failures were recorded in metallic components of machines, infrastructure and constructions, predominantly bridges and railroads. However, a proper understanding of the mechanism of failure due to fatigue was not understood until the 20th century, with many engineers and scientists building upon the earlier observations and tests of railway engineer August Wöhler.

The present-day study and application of fatigue strength are expansive, as the tolerance for failure becomes smaller and design criteria become more stringent. More fatigue strength data is being generated via fatigue analysis for more materials, and it is a crucial component in calculating the lifespan or fatigue life of a product or structure. Fatigue strength knowledge is vital to modern-day applications in aerospace, medicine and sports, amongst others. 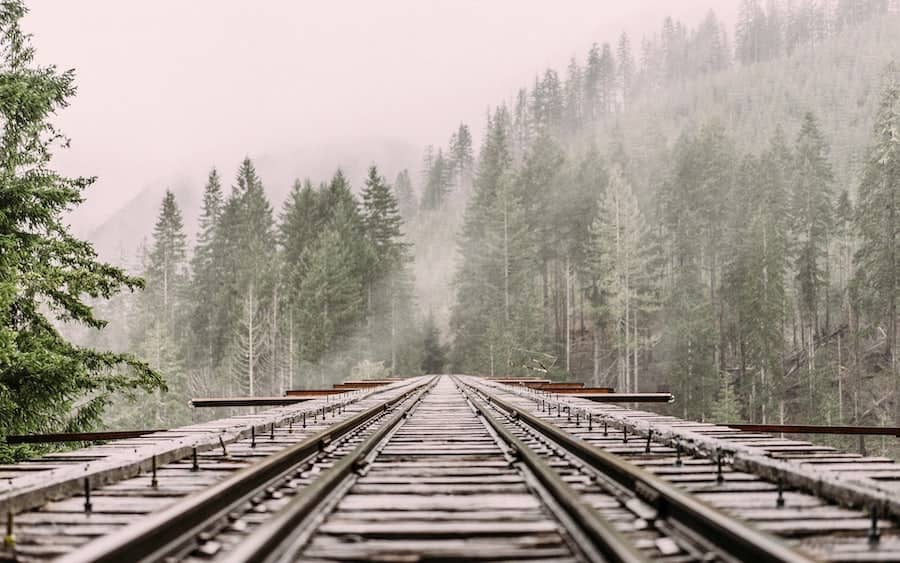 What is fatigue strength?

There are different types of fatigue, namely [2]:

Fatigue strength, however, generally refers to mechanical fatigue, and it is defined as the stress level below which there would be no fatigue failure even if there were to be a certain very high number of stress cycles applied to a material. This mechanical stress can be either axial stress, torsional stress or flexural stress. Fatigue strength is often used interchangeably with fatigue limit or endurance limit, but they are not strictly the same thing.

Fatigue limit is a stress level below which there would be no fatigue failure no matter the number of load cycles the material is subjected to. But since it is impossible to test a material for an infinite number of cycles, the fatigue limit is an assumption deduced from testing results. It should be noted that some materials, such as aluminium and copper, do not have an endurance limit because they will always eventually fail from fatigue when subjected to a certain number of cyclic loading regardless of how small the load is. Therefore, the fatigue strengths of such materials are usually calculated as the stress levels they can endure without failing at a large total number of cycles, usually 5x108 cycles [1].

A material that is operating under cyclic loads below its fatigue strength will be expected never to fail as a result of fatigue alone for a certain number of specified loading cycles.

Fatigue strength is calculated experimentally through several methods, and sometimes it is extrapolated through numerical fatigue analyses based on existing empirical data. The S−N diagram is the most widely used concept when calculating fatigue strength. It is a graph that plots the constant cyclic stress of amplitude S applied to a material specimen against the number of loading cycles N the specimen can withstand before eventually failing. The number of cycles required for failure is often to the tune of millions, especially at low load levels, and so the x-axis is normally plotted logarithmically [3]. 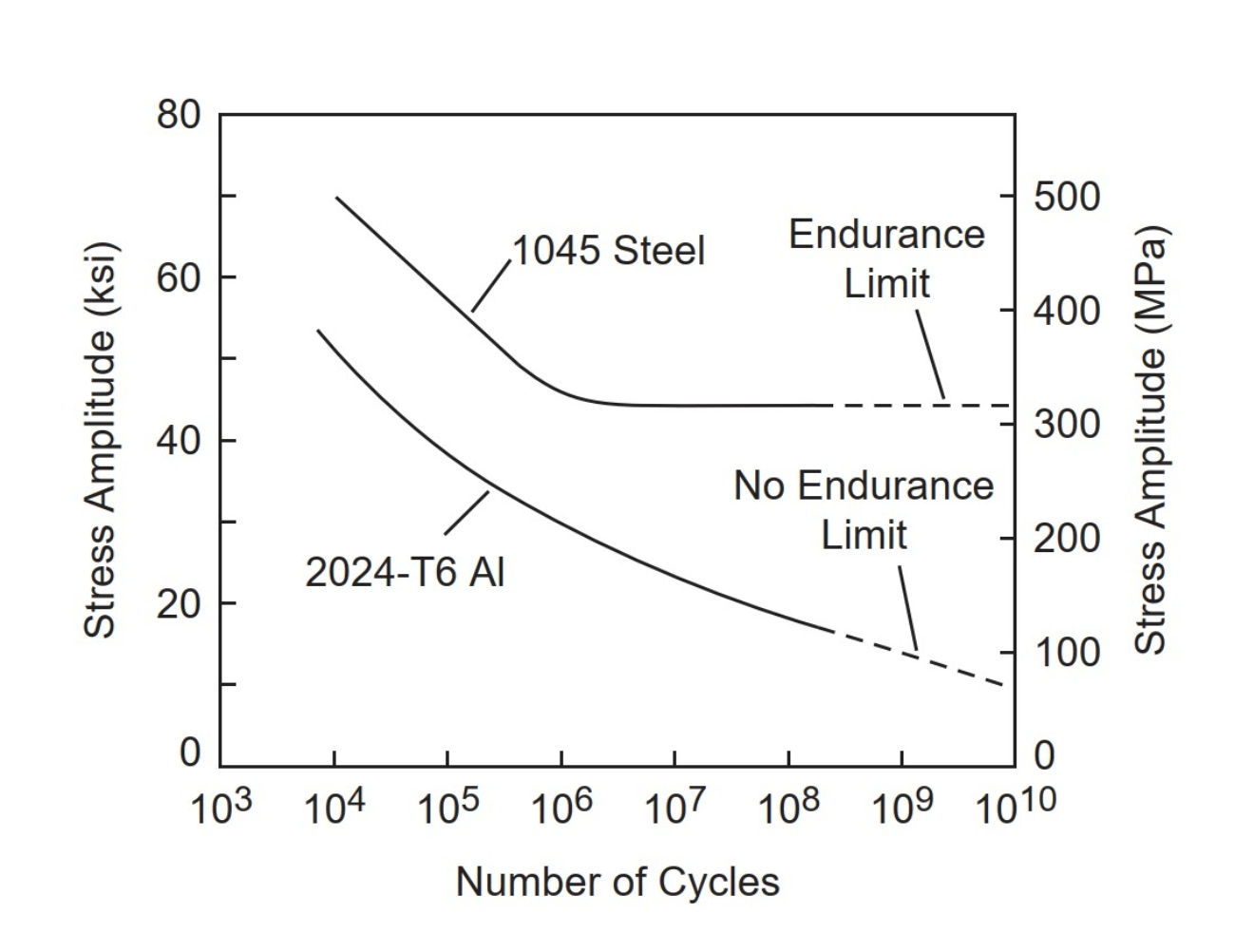 There is considerable variance in test results. That is why as many tests as possible are conducted, and the S−N diagram is a representation of the mean of the data from several tests. The stress level below which the material does not fail and can be theoretically cycled infinitely is known as the endurance limit, and it is determined as the stress level where the curve becomes a horizontal line. However, for some materials, the endurance limits are not clearly defined, and a certain number of loading cycles considered adequate for the lifetime of the material is specified and plotted. The stress level at that number of cycles, typically between 1x108 and 5x108, is considered the fatigue strength for that material.

Below are some of the important parameters which are used to plot an S-N diagram from which fatigue strength can be determined. They are also used for calculations of fatigue strength by numerical analyses [4].

where σmin is the minimum stress; σmax is the maximum stress.

The fatigue strength at N cycles is denoted by σN and can be calculated with the above parameters according to several formulas such as the Goodman, Gerber, and Soderberg formulae [1].

The primary application of fatigue strength is in design. Engineering design requires stress limits to ensure fatigue failure does not happen before the lifespan of the materials being used has been reached. Determining the safety factors against fatigue failure is a complicated task because there are a lot of factors at play that affect a material during its service. Such factors include composition, microstructure, processing, temperature, physical dimensions, stress range, and type of loading [5].

There are several methodologies or “philosophies” which guide the tolerances of fatigue failure in design [1].

Infinite-life design is the oldest and most conservative methodology, and it ensures that the material only endures stresses well below its fatigue strength during its lifespan.

Safe-life design accounts for plastic deformation rather than fracture as its failure criterion. Design is such that a part is stipulated for a limited time of service, after which it must be replaced.

Fail-safe design assumes that cracks due to fatigue will be discovered and remedied before failure occurs. Design is such that no one component, even if it fails, can cause catastrophic failure of the entire structure. This methodology was developed in the aviation industry and is dependent on thorough inspections (non-destructive tests) and certifications.

Damage-tolerant design is the least conservative methodology and is based on an extensive understanding of crack formation and propagation. It depends on knowing when crack propagation would reach a critical point that would lead to fatigue fracture and ensuring the material does not reach that point. 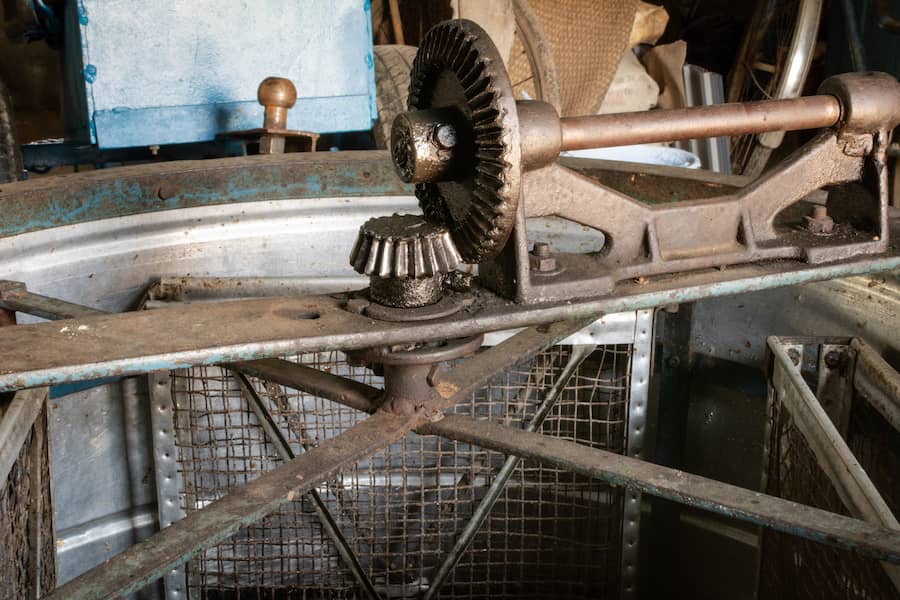