Want to keep this datasheet? Save it now in your required format

Sandvik SAF 2507® is a super-duplex (austenitic-ferritic) stainless steel for service in highly corrosive conditions. The grade is characterized by:

More technical information and charts that are relevant to the materials corrosion, mechanical and physical performance are displayed in the figures on the right side of the material page.

See where Sandvik SAF 2507® Solution Annealed falls on the material property chart for Density against Elastic modulus in your materials selection and design process. Our Ashby charts are interactive with more technical data upon clicking. Sign up to get access to this premium feature for free.

for 30°C to the mentioned temperature

The starting force needed for bending is slightly higher for Sandvik SAF 2507® than for standard austenitic stainless steels (ASTM 304L and 316L). If the service conditions are on the limit of the stress corrosion resistance of Sandvik SAF 2507® heat treatment is recommended after cold bending. For pressure vessel applications in Germany and the Nordic countries heat treatment may be required after cold deformation in accordance with VdTÜV-Wb 508 and NGS 1609. Heat treatment should be carried out by solution annealing (See under Heat treatment) or resistance annealing.

If Sandvik SAF 2507® is exposed to temperatures exceeding 250°C (480°F), for prolonged periods, the microstructure changes, which results in a reduction in impact strength. This does not necessarily affect the behavior of the material at the operating temperature. For example, heat exchanger tubes can be used at higher temperatures without any problems. Please contact Sandvik for more information. For pressure vessel applications, 250°C (480°F) is required as a maximum, according to VdTÜV-Wb 508 and NGS 1609.

Figure 5 and Figure 6 show results from tests of Sandvik SAF 2507® and various stainless steels and nickel alloys in acetic acid contaminated with chlorides which in practise are frequently present in processes.

Practical experience with Sandvik SAF 2507® in organic acids, e.g. in teraphthalic acid plants, has shown that this alloy is highly resistant to this type of environment. The alloy is therefore a competitive alternative to high alloyed austenitics and nickel alloys in applications where standard austenitic stainless steels corrode at a high rate.

Resistance to inorganic acids is comparable to, or even better than that of high alloy austenitic stainless steels in certain concentration ranges. Figures 7 to 9 show isocorrosion diagrams for sulfuric acid, sulfuric acid contaminated with 2000 ppm chloride ions, and hydrochloric acid, respectively.

A parameter for comparing the resistance to pitting in chloride environments is the PRE number (Pitting Resistance Equivalent). The PRE is defined as, in weight-%, PRE = %Cr + 3.3 x %Mo + 16 x %N

The minimum PRE value for Sandvik SAF 2507® seamless tubes is 42.5. This is significantly higher than e.g. the PRE values for other duplex stainless steels of the 25Cr type which are not super-duplex. As an example UNS S31260 25Cr3Mo0.2N has a minimum PRE-value of 33.

One of the most severe pitting and crevice corrosion tests applied to stainless steel is ASTM G48, i.e. exposure to 6% FeCI₃ with and without crevices (method A and B respectively). In a modified version of the ASTM G48 A test, the sample is exposed for periods of 24 hours. When pits are detected together with a substantial weight loss (>5 mg), the test is interrupted. Otherwise the temperature is increased by 5 °C (9 °F) and the test is continued with the same sample. Figure 11 shows critical pitting and crevice temperatures (CPT and CCT) from the test.

Potentiostatic tests in solutions with different chloride contents are presented in Figure 11. Figure 12 shows the effect of increased acidity. In both cases the applied potential is 600 mV vs SCE, a very high value compared with that normally associated with natural unchlorinated seawater, thus resulting in lower critical temperatures compared with most practical service conditions.

The scatter band for Sandvik SAF 2507® and 6Mo+N illustrates the fact that both alloys have similar resistance to pitting, and CPT-values are within the range shown in the figure. Tests were performed in natural seawater to determine the critical crevice corrosion temperature of samples with an applied potential of 150 mV vs SCE. The temperature was raised by 4°C (7°F) steps every 24 hours until crevice corrosion occurred. The results are shown in the table below.

In these tests the propagation rates of initiated crevice corrosion attacks, at 15-50°C (59-122°F) and an applied potential of 150 mV vs SCE were also determined. These were found to be around ten times lower for Sandvik SAF 2507® than for the 6Mo+N alloy.

The corrosion resistance of Sandvik SAF 2507® in oxidizing chloride solutions is illustrated by critical pitting temperatures (CPT) determined in a 'Green death' -solution (1% FeCI₃ + 1% CuCl₂ +11% H₂SO₄ + 1.2% HCI) and in a 'Yellow death' -solution (0.1 % Fe₂(SO₄)₃ + 4% NaCl + 0.01 M HCI). The table below shows CPT-values for different alloys in these solutions. It is clear that the values for Sandvik SAF 2507® are on the same level as those for the nickel alloy UNS N06625. The tests demonstrate a good correlation with the ranking of alloys for use as reheater tubes in flue gas desulfurization systems.

Figure 15 shows the results of SCC tests at room temperature in NACE TM0177 Test solution A (5% sodium chloride and 0.5% acetic acid saturated with hydrogen sulfide). No cracking occurred on Sandvik SAF 2507®, irrespective of the applied stress.

In accordance with ISO 15156/NACE MR 0175 solution annealed and rapid cooled wrought Sandvik SAF 2507® is suitable for use at temperatures up to 450 °F (232 °C) in sour environments in oil and gas production, if the partial pressure of hydrogen sulphide does not exceed 3 psi (0.20 bar).

Sandvik SAF 2507®, with a maximum hardness of 32 HRC, solution annealed and rapidly cooled, according to NACE MR0103, is suitable for use in sour petroleum refining.

Hydrogen diffuses much faster in the ferrite phase than in the austenite phase. Therefore, ferritic steels and ferrite containing steels, e.g. super duplex stainless steels, are more susceptible to HISC than austenitic stainless steels. A high mechanical stress increases the risk of HISC by increasing the hydrogen diffusion rate, crack initiation and propagation in the material.

In super duplex stainless steels, cracks tend to propagate in the embrittled ferrite phase and arrest at ferrite-austenite phase boundaries. Susceptibility to HISC significantly increases with increasing austenite spacing. Coarse-grained microstructures are therefore more susceptible. A testing program performed at Sandvik Materials Technology has confirmed that tendency to HISC is reduced when austenite spacing is less than 30 μm, as recommended by DNV RP-F112. Cold pilgered and solution annealed tubes with austenite spacing between 5-15 μm have shown very good resistance to HISC under applied stress up to 130% of the yield strength without cracking.

The acceptable stress without HISC occurring for products with different austenite spacing is illustrated in figure 16.

Intergranular corrosion: Sandvik SAF 2507® is a member of the family of modern duplex stainless steels whose chemical composition is balanced to give quick reformation of austenite in the high temperature heat affected zone of a weld. This results in a microstructure that provides the material with good resistance to intergranular corrosion. Sandvik SAF 2507® passes testing to ASTM A262 Practice E (Strauss test) without reservation.

Compared to austenitic stainless steels, Sandvik SAF 2507® has a higher proof and tensile strength. This must be kept in mind when expanding tubes into tubesheets. Normal expanding methods can be used, but the expansion requires higher initial force and should be undertaken in one operation. As a general rule, tube to tubesheet joints should be welded if the service conditions include a high chloride concentration, thus limiting the risk of crevice corrosion.

The tubes are normally delivered in heat treated condition. If additional heat treatment is needed due to further processing the following is recommended.

Being a two-phase material (austenitic-ferritic) Sandvik SAF 2507® will present a different tool wear profile from that of single-phase steels of type ASTM 304L. The cutting speed must therefore be lower than that recommended for ASTM 304L. It is recommended that a tougher insert grade is used than when machining austenitic stainless steels, e.g. ASTM 304L.

Seamless tube and pipe in Sandvik SAF 2507® is supplied in dimensions up to 260 mm outside diameter. The delivery condition is solution annealed and either white pickled, or bright annealed.

Other forms of supply:

The weldability of Sandvik SAF 2507® is good. Welding must be carried out without preheating and subsequent heat treatment is normally not necessary. Suitable methods of fusion welding are manual metal-arc welding (MMA/SMAW) and gas-shielded arc welding, with the TIG/GTAW method as first choice.

This material data has been provided by Sandvik Materials Technology.

Additional services:
To ensure our customers' processes and/or products attain – and even exceed – their performance expectations, we offer a wide range of services within both the technical area and delivery logistics. Our technical services include: • Material consultations through our worldwide sales network • Advice in process optimization based on an in-depth applications knowledge • Joint new product development supported by our extensive R&D program View product groups and services

Equipment For The Chemical Industry In General

Materials by this supplier

See all materials by this supplier 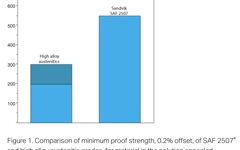 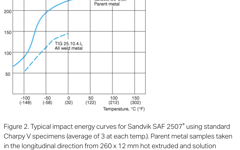 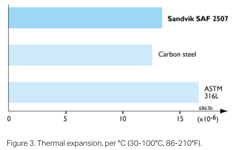 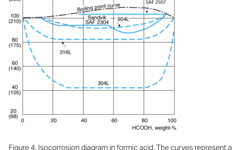 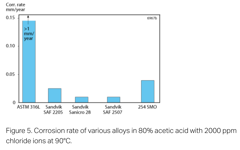 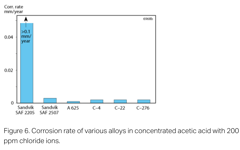 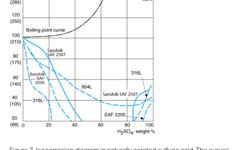 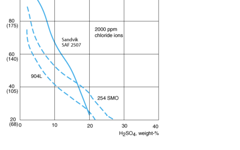 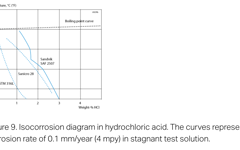 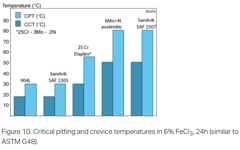 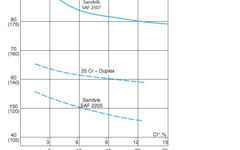 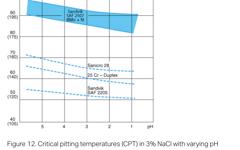 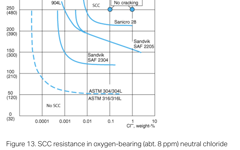 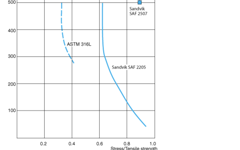 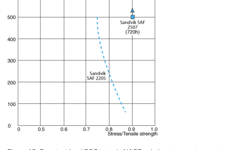 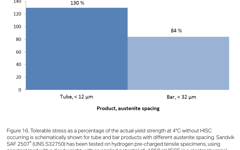 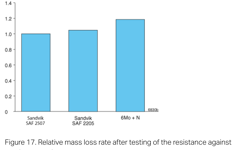