What is Magnetic Coercivity?

When a magnetic material is exposed to an external magnetic field, it is compelled to become magnetised. It can also be demagnetised by an applied field.

Magnetic coercivity is closely related to permeability, and understanding one property can make it easier to understand the other. Permeability is a material property which indicates how readily the material supports magnetic field development.

What is magnetic coercivity?

Once the magnetising field is removed, a soft magnetic material would naturally start to lose its magnetism without any further action. Consider a typical hysteresis loop, as shown in Figure 1 below. Several properties can be visualised from the graph.

Magnetic coercivity (C) is the magnetising force (-H) that would be required to return the magnetisation of a material to zero after it had been previously magnetised to saturation.

Remanence (B) is the magnetism left in a material after the magnetising field has been removed.

Saturation (A, D) occurs when the magnetism reaches a maximum and cannot increase further even if the magnetising field is increased indefinitely. 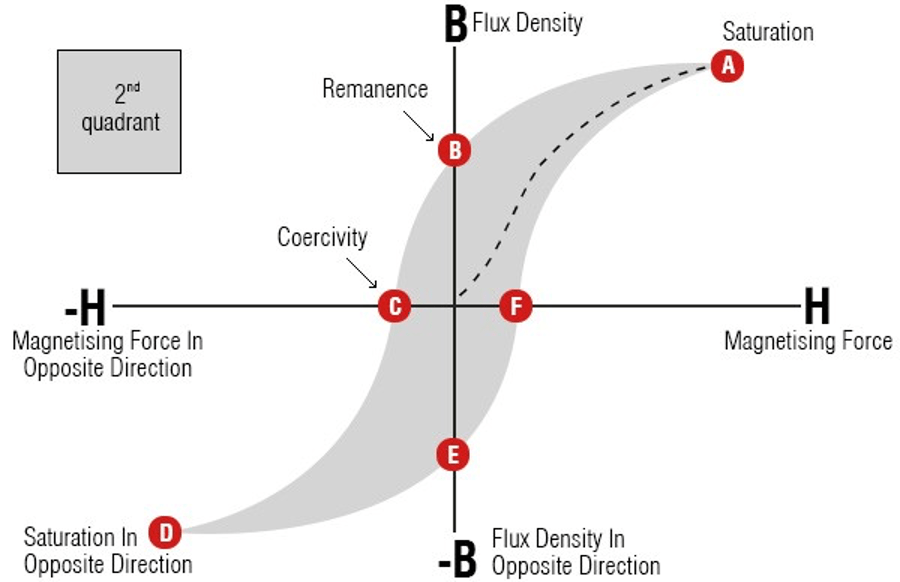 Magnetic coercivity can be measured in several ways, including empirical measurements and numerical analysis. Magnetic properties, including magnetic coercivity, can be measured through the use of a digital permeameter [2]. It can also be measured through the analysis of the hysteresis loop of a material. The information to plot the loop is derived from software interpretation of data obtained from a device such as an oscilloscope [3]. There is also a measurement technique that involves recording the alternating electromotive force generated by vibrating a test sample in a search coil and the data computed through numerical analysis. The device used for this measurement is called a vibrating sample magnetometer [4].

Moreover, temperature has an effect on the magnetic properties of a material. So, it is important to specify the temperature in which a material is being evaluated as it may differ greater at different temperatures.

Coercivity is a lot lower for soft magnetic materials. Thus, they are better suited for applications where there is a rapid reversal in polarities. These include transformer cores and electric motors, where there are constant magnetisation and demagnetisation. The low coercivity of these materials reduces the losses during their operation significantly.

On the other hand, materials with high coercivity are required in situations where they need to retain their magnetism even when exposed to a magnetic field, as long as it is not strong enough to cause demagnetisation. Such materials would be referred to as hard magnetic materials or permanent magnets. They are used both for their ability to magnetise and their resistance to demagnetisation. Common examples of their application include speakers, hard drives, and electric generators.