In his quest to become rich through the manufacture of artificial diamonds, American inventor, Edward C. Acheson, first discovered silicon carbide in the year 1891. After failing to obtain diamonds by extremely heating carbon, he used electric heat from a powerful electric generating plant to infuse clay with carbon, resulting in shiny hexagonal crystals that were hard enough to scratch glass, which he called carborundum. These were silicon carbide crystals.

Silicon carbide, often referred to by its chemical formula, SiC, is a synthetically produced crystalline compound consisting of silicon and carbon.

Due to its exceptional abrasive properties, SiC was the first synthetic abrasive to be produced and has been in use since the late 19th century, in applications ranging from sandpaper to grinding wheels and cutting tools. Over time, the uses of SiC have evolved, with the compound being widely implemented in the automotive, aerospace and electronics industries.

Here, we dive into what silicon carbide is all about as we provide you with answers to the most frequently asked questions (FAQs) about silicon carbide covering its main characteristics, production, common uses and applications, cost, and producers.

1. What are the main properties of silicon carbide?

Not only can it shine bright, but silicon carbide is also a durable non-oxide ceramic that possesses a vast range of desirable properties. This makes it an ideal material for a wide variety of industrial applications. Combining silicon and carbon results in superior mechanical, chemical, and thermal properties. Some key properties are listed in the table below.

Since its initial discovery in 1891, SiC has been produced in powder form and used as a synthetic abrasive material. This is due to its high level of hardness, ranking 9 on the Mohs scale, which outclasses most known materials, only to be surpassed by a handful of others, such as boron, boron nitride, and diamond. Its natural counterpart, moissanite, exists in mineral form and has a similar hardness level, but it is quite rare on Earth as it is found mainly in meteorites and upper mantle rock. That is why synthetic silicon carbide, or carborundum, is the one used as an abrasive, and not the natural moissanite. SiC is generally used to grind carbides and ceramics, non-ferrous materials of lower ductility and tensile strength.

3. How does silicon carbide react with water?

One of the significant material properties in high-temperature applications is oxidation resistance. And studies have shown that when exposed to water vapour at temperatures exceeding 500°C and pressures between 10 and 100 MPa, silicon carbide reacts with water to form unstructured silicon dioxide (SiO2) and methane (CH4). This reaction occurs in the following manner:

Since water diffuses faster than oxygen into the resulting silica layer, it is said that the overall reaction is faster than the normal SiC oxidation reaction. This means that SiC oxidizes more quickly in humid atmospheres than in dry ones.

4. Why is silicon carbide hard?

Silicon carbide derives its hardness and strength from its composition of tetrahedral structures of silicon and carbon held by strong covalent bonds in its crystal lattice.

With a hardness level of 9 on the Mohs scale, SiC is one of the hardest of the commonly used abrasives (was the hardest synthetic material until the discovery of boron nitride in 1929, which was found to have a 9.5 hardness level on the Mohs scale), despite being less resistant to impact than aluminium oxide and experiencing faster wear during grinding of metals with high affinity to carbon, such as nickel and iron.

It is sometimes misguidedly compared with diamond, as diamond sits at 10 on the Mohs scale, one level above silicon carbide. Yet, diamond's hardness is almost 3 times that of silicon carbide. Nonetheless, SiC is still extremely hard.

Yes, but under certain conditions.

Silicon carbide, in its pure form, behaves as an electrical insulator. However, with the controlled addition of impurities or doping agents, and because SiC has the necessary resistivity, it can express semi-conduction properties; in other words, as a semiconductor, it neither allows a free-flowing current nor completely repels it.

A p-type semiconducting SiC can be achieved by doping it with aluminium, boron, or gallium, while nitrogen and phosphorus impurities result in an N-type semiconductor. Superconductivity could also be achieved with further controlled doping. Yet, electrical ageing, which is the increase in electrical resistivity, could very well affect silicon carbide's electrical conductivity properties. Ageing is said to be related to the oxidation of the material. SiC possesses the ability to conduct electricity under some conditions but not others, based on factors such as voltage or intensity of infrared radiation, visible light, and ultraviolet rays.

6. How to make silicon carbide?

In 1891, Acheson heated a mixture of clay and powdered coke in an iron bowl. The bowl, along with an ordinary carbon arc-light, acted as electrodes. By doing this, bright green crystals with significant hardness (almost as close to that of diamond), attached to the carbon electrode; and so, silicon carbide was originally made.

Today, the manufacture of SiC is based on the underlying methodology used by Acheson. Pure silica sand and grounded coke (carbon), is combined and added around a carbon conductor. This process is carried out in a brick electrical resistance furnace. When an electrical current is applied, a chemical reaction occurs where the carbon combines with the silicon in the sand to form both SiC and carbon monoxide gas (CO). The chemical reaction is as follows:

During the furnace run, energy exceeding 100,000 kW per run can be consumed, since this stage of SiC manufacture can last several days. At this time, temperatures can reach up to 2700°C in the core of the furnace and approximately 1400°C at the extremities. Upon completion of this stage, loosely knitted crystals are formed, which consist of a SiC core surrounded by unconverted raw material. Once this process is completed, the SiC is crushed, sized, and sorted in accordance with intended product usage. 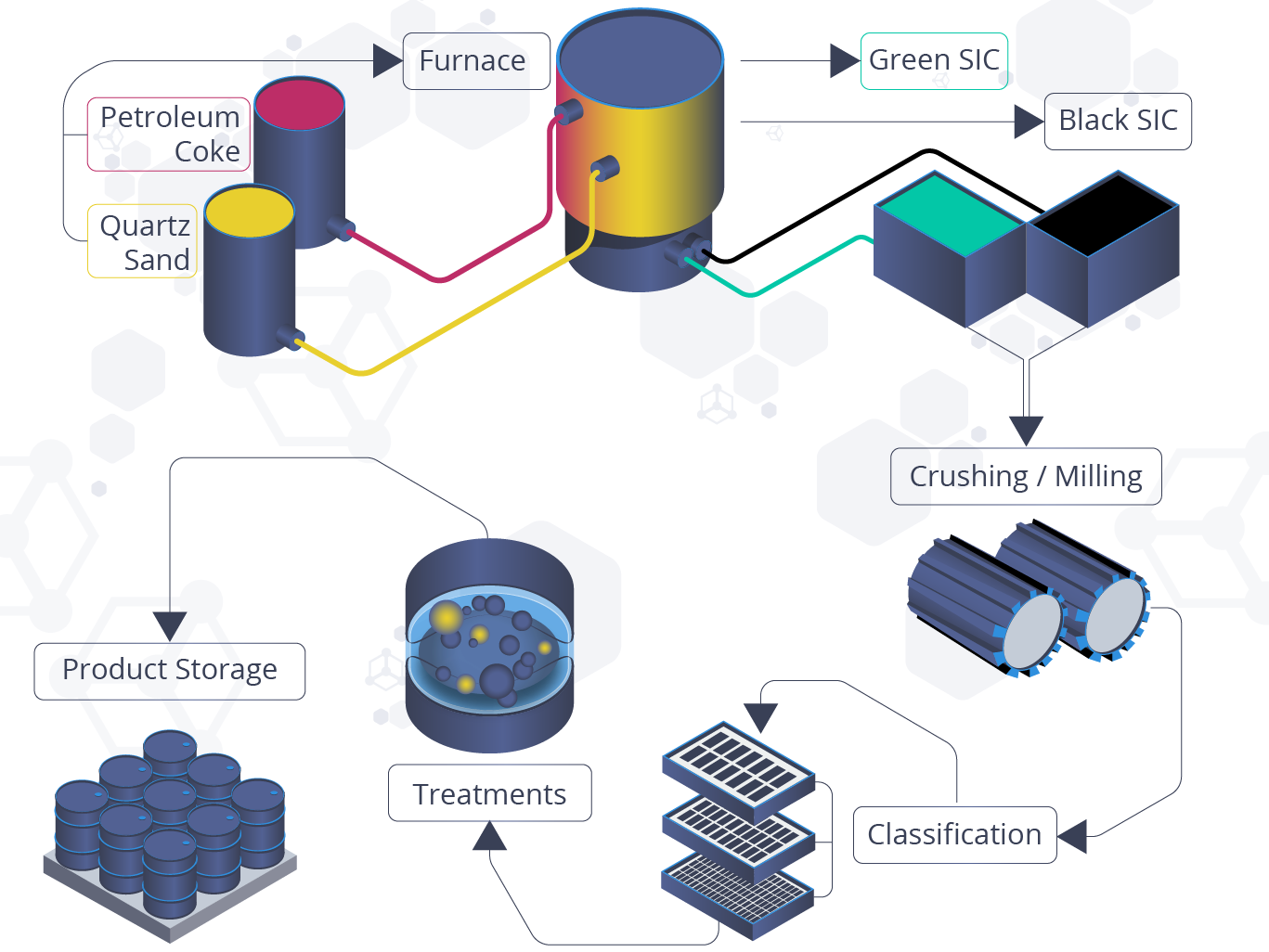 7. Where is silicon carbide used?

Silicon carbide is the most widely used material in structural ceramics. Its versatility and properties make it the perfect compound for numerous industries. Due to its hardness and abrasive nature, SiC is used as an abrasive material in processes such as grinding, honing, sandblasting, and water jet cutting. Laminating it with paper, wood, or cloth can result in frictional grip.

In the automotive industry, SiC’s ability to withstand high temperatures without distortion makes it ideal for the manufacture of ceramic brake discs for sports cars. It is also used as an oil additive, resulting in minimised friction and emissions.

As a semiconducting material, silicon carbide fits perfectly well with electronics, especially due to its high voltage resistance that can reach up to 10 fold that of silicon, a very common material in electronic applications.

Unlike conductors, which constantly permit the flow of electricity, semiconductors allow their conductivity to be controlled via stimulation by electric currents, electromagnetic fields, or even light. This makes it possible to construct electronic devices which amplify, switch, or convert signals in an electrical circuit.

While conventional silicon semiconductors have been in use for decades, semiconductors constructed from silicon carbide are renowned for their higher thermal conductivity, increased electron mobility, and lower power losses. SiC diodes and transistors can also operate at higher frequencies and temperatures without compromising reliability. Schottky diodes (rectifiers in power supplies) and FETs/MOSFETs (transistors) are examples of the most common electronic applications of silicon carbide.

Other SiC applications include armor in bulletproof vests and sealants for pump shafts running at high speeds.

8. What are the commercial grades of silicon carbide?

NBSC has high mechanical strength and thermal shock resistance. It is produced by firing pure SiC mixed with additives inside a nitrogen medium at elevated temperatures. Silicon carbide starts to bond during the silicon nitride phase.

RBSC has high oxidation resistance and can endure a wide range of alkalis and acids. It is produced by mixing SiC powder with a pre-formed carbon powder, forming the required shape, and then firing it off. The resulting free silicon fills the pores and gives rise to a high strength, low porosity silicon carbide material.

SSiC has very high corrosion and chemical resistance in addition to its high strength and ability to function in high temperature applications. It is produced by infiltrating pure SiC powder with non-oxide sintering aids, forming the shape, and sintering the mixture at high temperatures in a chemically inactive medium.

9. How much does silicon carbide cost?

The China Silicon Carbide Industry Report, 2016-2020 - Research and Markets, states that in 2016, China's silicon carbide exports had an average price of USD 0.9 per kg, less than a quarter of the average import price (USD 4.3 per kg). This report also states that in 2015, the global silicon carbide substrate market size reached about USD 111 million, and the size of silicon carbide power devices hit the USD 175 million mark. Both markets are expected to experience an average annual growth rate of more than 20% in the next five years.

10. Where to buy silicon carbide?

Several companies sell different types of silicon carbide, depending on the application and required properties of the customer. You can find a list of these silicon carbide materials and their suppliers here. For more information, make sure to contact Matmatch or the material supplier directly through the contact supplier button in the link.

Equipment For The Paper Industry