Graphene is a material consisting of a two-dimensional array of carbon atoms. The atoms are arranged in a hexagonal lattice, which resembles a honeycomb structure. Graphene can be considered as an infinitely large aromatic molecule and a single layer of the carbon graphite structure.

The hexagonal structure of graphene. By Yikrazuul (Diskussion) [Public domain], via Wikimedia Commons.

Graphene was predicted to exist as early as the 1940s, however, it was not until 2004 that monolayer graphene sheets were first synthesised. This was achieved by Andre Geim and Konstantin Novoselov, who in 2010 received the Nobel prize in physics for their discovery. Their synthesis method, termed the ‘Scotch tape method,’ was astonishingly simple. Graphene monolayers could be isolated merely by mechanical exfoliation of graphite: pulling one layer away from the bulk using adhesive tape.

In the meantime, other methods for producing graphene have been developed. These include sonication and centrifugation of graphite in a liquid to create a graphene dispersion, synthesis from sugar, called the ‘Tang-Lau method,’ reduction of silicon carbide and epitaxial growth by chemical vapour deposition (CVD).

Graphene has become a highly researched material not only for discovery of synthesis methods, but also for its impressive properties. The scientific interest in the material has grown significantly since its first isolation in 2004 and continues to do so. 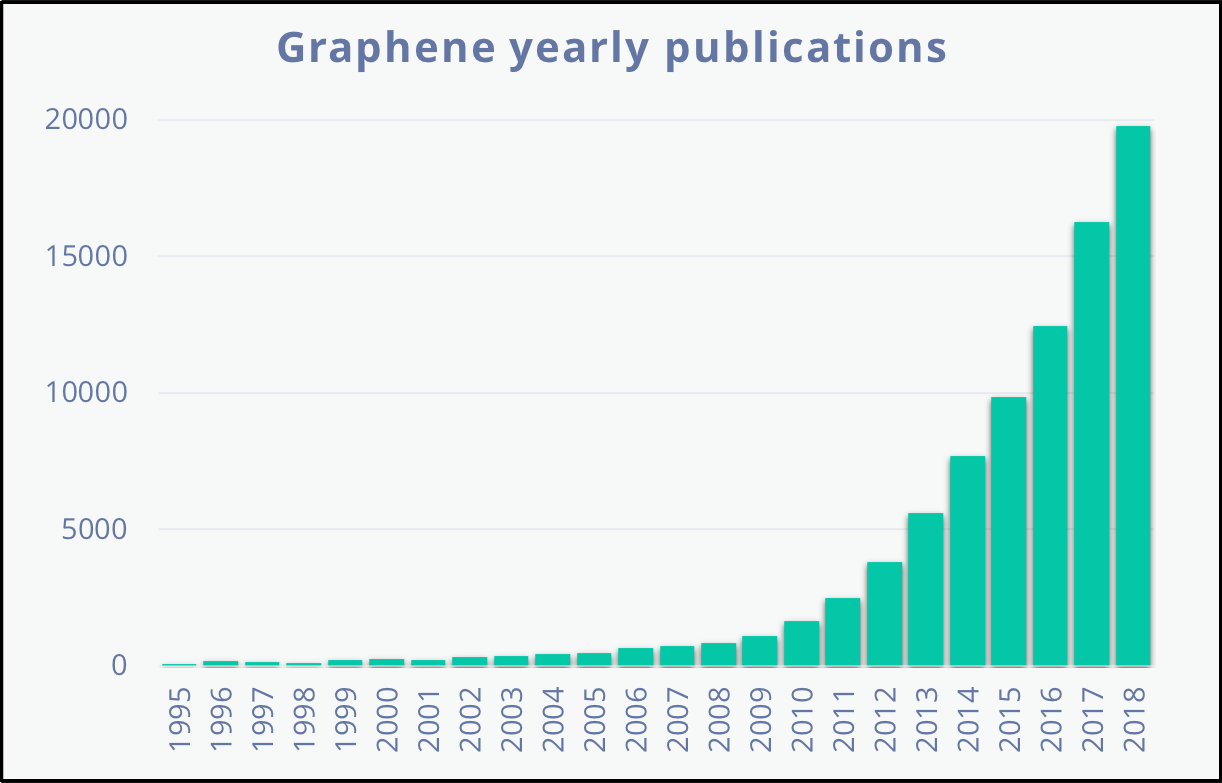 The number of scientific articles published per year containing the keyword graphene. Data was collected from www.sciencedirect.com on 2nd Nov. 2018.

Graphene is usually handled either in a dispersion, on a substrate, or as a powder of graphene oxide. Irrespective of the delivery form, the material itself has many outstanding properties including electronic, optical, thermal and mechanical properties. Many of the extraordinary properties of graphene arise from the fact that it is only one atomic layer thick.

Graphene is an extremely light material, having a planar density of 0.77 mg/m2. It also has the toughest and hardest crystal structure of all known materials. It has a tensile strength of 125 GPa and an elastic modulus of 1.1 TPa, compared to an elastic modulus of 200 GPa for the most common steel. Its breaking strength is 42 N/m; thus graphene has 100 times better mechanical strength than steel.

Graphene is highly transparent to visible light, with a transparency of 97.7 %. This is taken advantage of when determining the number of graphene layers, as each layer absorbs 2.3 % of light.

Graphene has a very high electron mobility (2 × 105 cm2/Vs), making it the most highly conductive material at room temperature, with a conductivity of 106 S/m and a sheet resistance of 31 Ω/sq.

Graphene has a small overlap between the valence and conduction bands. Because of this, it is classed both as a semimetal and as a zero-bandgap semiconductor. The presence of a certain concentration of electrons in the conduction band and of holes in the valence band, even at absolute zero temperature (while taking into consideration its gapless electronic structure, which means that electrons can swoop through the conduction band) is the reason graphene is classified as a semi-metallic material and is the origin of its high electrical conductivity.

Tuning of properties through functionalisation

Due to its two-dimensional nature, graphene can be offered either as layers on a substrate, as a dispersion (or ink) and in the form of a graphene oxide powder.

Graphene ink, when applied to a surface results in an electrically conductive film with a sheet resistance of 15 W/sq.

Graphene on PET films are also available. In this case, exceptionally high-quality monolayer graphene is grown via CVD on a 188 μm-thick PET substrate with dimensions of up to 600 mm × 500 mm. This can then also be transferred onto a new substrate. 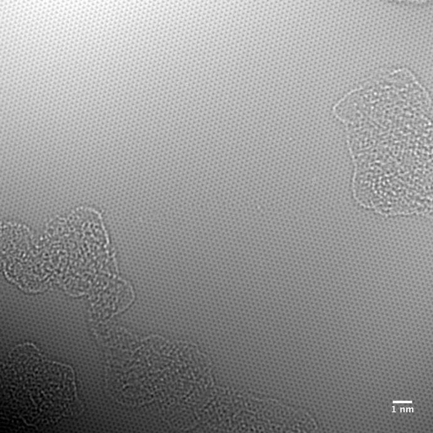 Finally, graphene can also be delivered in the form of graphene oxide powder. In this case, the powder is present in an aqueous dispersion and exhibits a mean particle size of 285 μm, a concentration of 4.0 mg/ml and a pH value of 2.20—2.50.

High-quality graphene is usually grown via chemical vapour deposition (CVD). This is one of the most common methods of producing high-quality graphene. In this process, gaseous reactants are introduced in a reaction chamber before reacting to form a film of the desired material on the surface of a substrate.

In the first step, carbon atoms are created via pyrolysis (thermal decomposition in an inert atmosphere). This is carried out on the substrate surface to prevent the formation of carbon clusters, or soot. The substrate used is often a metal catalyst.

In the second step, a reaction occurs between the carbon atoms and the catalyst substrate which results in the formation of graphene.

Despite its relatively recent discovery, graphene has been tested extensively in fabricating many different devices, some in the early stages of development, others already on the market.

Due to its high transparency and high electrical conductivity, graphene is very attractive as a transparent conductor, which could be a less environmentally damaging replacement for indium tin oxide (ITO). Due to its flexibility, graphene can also be used in flexible displays.

In addition to its electrical properties, its chemical and thermal properties lend it for use in strain sensors, gas sensors, temperature sensors, biosensors and flow sensors. Smartphone manufacturer Huawei has begun employing graphene in certain smartphones as a cooling device for integrated circuits.

The properties of graphene include: