Tool Materials for Metal Forming: The Case for Aluminium Bronze

When you modify a workpiece’s form, surface, and material properties through the processes of metal forming, you most likely encounter issues of material scrap and serious scratches on your work. This is, generally, due to the surface roughness of the die within which the work is formed. Commonly used tool steels and alloys such as ferrotitanium alloy begin to rapidly lose their low friction coefficient and surface roughness after as few as a hundred cycles. This calls for more innovative materials that can maintain low levels of friction and roughness to be used in such metal forming dies. Aluminium bronze has proven to be an excellent candidate as a tool material. Here, we will discuss the difference between those materials and how aluminium bronze has moved up the ranks to be one of the best materials for metal forming tools. 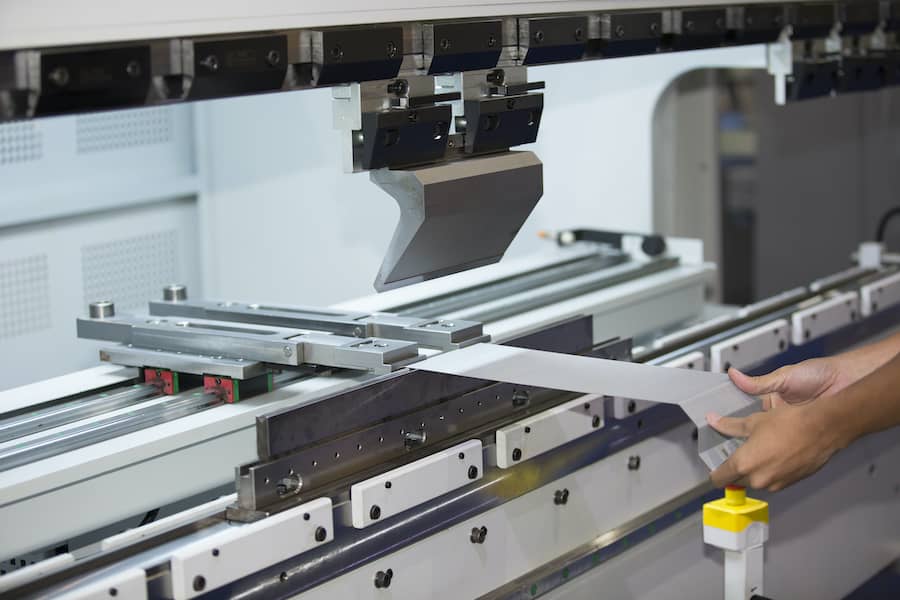 Metal forming processes, such as drawing, extrusion, rolling, forging, and bending, are some of the major processes in manufacturing. Whether hot or cold, these processes make use of localised compressive forces that help deform the workpiece into a product of desired shape and surface. As those local compressive forces are applied on the workpiece, high contact pressures are generated at the interface between the die and the work. In addition to that, high shear stresses begin to develop during sliding alongside a rise in temperature at the areas of contact as a result of friction and plastic strain. Such conditions cause the transfer of some of the relatively soft workpiece material onto the surface of the harder die surface, resulting in a bonding phenomenon. This, in turn, adds to the surface roughness of the die, which can prove damaging to the workpiece, giving rise to severe scratches on its surface.

To minimise the effect of such an issue, lubrication is generally used as it preserves the geometry of the tools and the quality of the work by minimising friction and cooling the tools down. The latter helps prevent overheating and undesired drops in hardness. However, if the die material’s hardness is too high, the surface finish not precise, and the lubricant is mixed with hard particles, it would be quite difficult to avoid scratching. For that, the focus is centred on the die material and its properties.

Tool materials and how they fare against scratches

The tribological behaviour during metal forming is a significant determinant of the product quality, the tool service life, and the stability of the forming process. This relies on a number of parameters, most importantly:

With that in mind, the properties of the materials that make up the tools have a significant effect on many of these parameters. Of the common materials used in metal forming tools are tool steels such as P20, H13, and D2, ferroalloys such as the ferrotitanium alloy, and aluminium bronze such as AMPCO® 25.

Tool steels are a family of carbon alloy steels that are characteristic in their toughness, hardness, and resistance to wear and high temperature. They, generally, contain elements like chromium, molybdenum, tungsten, and vanadium, which help in forming carbides. AISI P20, for example, is a low-carbon (0.4% max) mould steel that is carburised or nitrided to be used in low-temperature die casting dies. AISI H13 is a chromium hot-work steel that is more commonly used in hot and cold work tooling, owing to its good toughness and fatigue resistance. Another example is AISI D2, a high-chromium cold-work steel with a relatively high carbon content, designed to exhibit high wear resistance and high hardenability. This tool steel is mainly used in cutting and deformation tools that are under high abrasive wear.

On the other hand, ferrotitanium is, as its name implies, an alloy of iron and titanium, with sporadic traces of carbon. Its titanium content ranges between 20% and 75%, depending on its manufacturing process. It is used in steelworking as titanium helps minimise the harmful effects of oxidising agents by stabilising compounds of oxygen, carbon, sulphur, and nitrogen.

However, these materials, being iron-based alloys, suffer from susceptibility to bonding with stainless steel products, a phenomenon mentioned above where particles from the workpiece tend to migrate to the harder tool material and adhere to its surface. As a result, the surface finish of the die becomes less smooth, exhibiting a significant increase in surface roughness. A rough die surface can easily scrape the worked product and cause severe issues in its form. 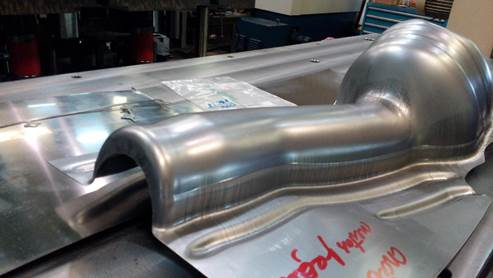 Figure 2. A workpiece with a poor surface condition (scratches) after being worked with D2 steel. (AMPCO METAL)

For that reason, engineers are inclined to utilise better materials with less solubility and less adhesion with iron. AMPCO® 25 from AMPCO METAL, for example, is a copper-based alloy that has significantly less solubility with iron (Cu: < 0.25 at%) than iron-based alloys (Fe: > 400 at%), low adhesion, and good thermal conductivity. On top of that, this aluminium bronze alloy has high wear resistance and excellent mechanical properties, such as high hardness, high compressive strength, and outstanding friction properties. All this makes it an ideal material for dies in forming and drawing processes. 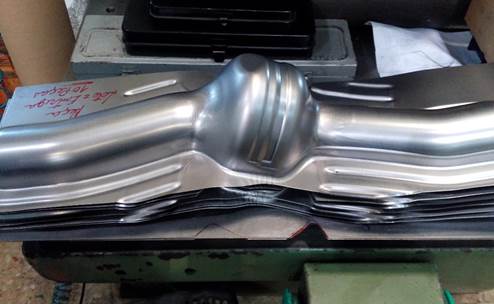 Figure 3. A workpiece with no scratches after being worked with AMPCO® aluminium bronze. (AMPCO METAL)

The figure below shows a direct comparison between ferrotitanate, tool steel (that has undergone boronising), and AMPCO® 25 in terms of surface roughness and coefficient of friction per number of shots. The superiority of AMPCO® 25 is quite evident as the roughness and friction coefficients of both ferrotitanate and tool steel begin to increase dramatically after about a hundred cycles. Whereas, AMPCO® 25 maintains minimal surface roughness (excellent finish) and a steady coefficient of friction even after ten thousand shots. 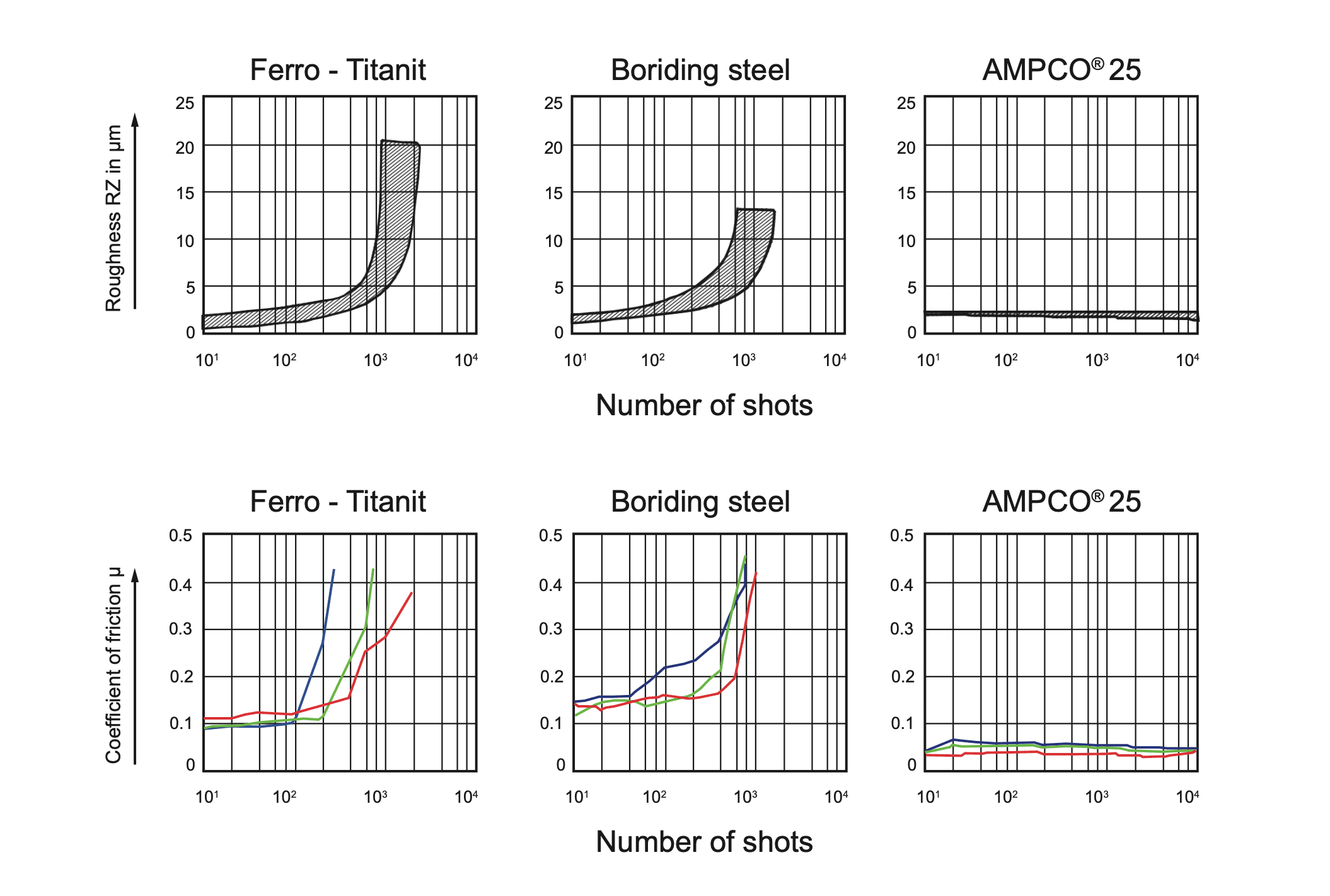 Figure 4. The change in surface roughness and friction coefficient per number of shots in each of ferrotitanate alloy, boriding steel, and AMPCO® 25. (AMPCO METAL)

While ferrotitanium and boriding steel are effective materials during the first hundred uses or so, the sharp increase in their surface roughness and friction coefficient renders them inadequate, which would require extended downtime for maintenance or replacement. Contrarily, AMPCO® 25 helps not only in extending the service life of the tools but also in maintaining high product quality in every shot.

Production and Properties of AMPCO® 25

The table below shows the different material properties of multiple AMPCO® 25 materials based on their production processes, together with the application areas in which AMPCO® 25 excels. Notice the main difference in compressive strength and hardness values.

Table 1. Property comparison between multiple AMPCO® 25 materials based on their production process.

Sourcing and acquiring the right material for your forming dies is no easy matter. However, material suppliers, like AMPCO METAL, have partnered with Matmatch to digitise their materials portfolio and make sure they provide engineers and product developers with all the necessary information that would help them make an informed decision.

AMPCO METAL is a reputable material producer serving customers for over a century with metals in different forms, including round bars, plates, tubes, and rectangles. Their global presence has enabled them to reach engineers all over the world. Today, being a trusted Matmatch supplier, they have taken a step further into the digital world to reach more users.

Visit the AMPCO METAL supplier page for more information on their materials and to get in direct contact with them.

AMPCO METAL, headquartered in Switzerland, is a leading international manufacturer and integrated distributor of specialty copper alloys and engineered products.

The company was founded in 1914 in the USA, as an innovator in the introduction and application of aluminium bronze alloys.

It has also introduced to the market several new metallurgical and process techniques that have made AMPCO METAL the recognized quality leader in specialty bronzes and copper alloys.

Over the years, AMPCO METAL has served customers throughout the world in a variety of applications seeking wear, corrosion-resistant and high conductive properties.

To obtain unique and consistent alloy characteristics, AMPCO METAL utilizes some of the most advanced equipments in the industry, a highly skilled engineering staff and sophisticated quality control procedures.

AMPCO METAL manufactures a wide range of alloys in a variety of grades and conditions and distributes them through its worldwide network of service centers. This enables AMPCO METAL to work closely with its customers to produce specialty alloys with the properties and characteristics they need.

A century of engineered excellence

Since 1914, AMPCO METAL has worked with industry partners across the Aerospace, Automotive, Steel & Titanium industries, as well as Marine, Oil, Gas & Chemical, along with and a host of others., across a range of applications, including friction & wear, corrosion resistance and heat & electrical conductivity. This unparalleled experience, combined with our technical expertise and engineered alloy excellence mean we’re able to be a global partner in creating metal solutions for our customers.

Introducing MICROCAST®, our patented high-performance aluminium bronze and specialty copper alloy production technology that delivers the most uniform grain size with the most outstanding wear resistance.

Aluminium bronzes are part of a copper alloys family containing aluminum as their principal alloying element. The properties of these alloys are governed by the properties of copper and aluminium when melted and casted together in rigorous and well-controlled processes.

Aluminium is soluble in copper up to about 8 wt%. This solution is characterized by a homogeneous single alpha phase which displays high ductility and excellent corrosion resistance by forming a protective skin of aluminum oxide on the surface. When increasing the aluminium content, a second phase forms in the microstructure known as the beta phase. These alloys are harder than a single alpha phase, with higher strength and higher mechanical properties.

Other alloying elements can be used like nickel to further improve the resistance to corrosion and mechanical properties. These alloys are used in highly-loaded construction parts that can be exposed to aggressive corrosion environments.

AMPCO METAL was a pioneer in developing aluminium bronze alloys and continues to engineer premium products for critical applications with its well-known AMPCO® product line to this day. Our high-quality, high property and uniquely hard metal range is trusted the world over for its broad use. AMPCO® Aluminium Bronze even extends to food-approved applications through alloys such as AMPCO® 8, AMPCO® 18 and AMPCO® M4.

AMPCOLOY® High Copper alloys are engineered with exceptional conductivity, high strength and unique wear characteristics, delivering higher lifetime, quality and performance, with cleaner trace elements. Copper has a face-centered cubic lattice, allowing it to have good cold working properties in addition to high electrical and thermal conductivity. With the addition of carefully selected alloying elements in well-defined proportion, high copper alloys develop the necessary strength and hardness properties with little decrease in electrical conductivity. These material are used in critical applications where both conductivity and mechanical properties are required.

With over a century of expertise, AMPCO METAL and its AMPCOLOY® product line are synonymous with premium quality for critical applications.

Standard Alloys continue the AMPCO tradition of excellence in engineered alloys, offering a premium product that can offer performance for demanding applications.

Our high-strength, durable AMPCO® Alloy range and bearing material, recognized for its unparalleled ability to perform under temperature. It’s created through a patented manufacturing process that gives it greater corrosion-resistant properties for a number of specific applications.

Equipment For The Metallurgical Industry