Biopolymers are naturally occurring polymers, which are produced by living organisms. They are distinct from synthetic biodegradable polymers.

There has been growing concern about the negative impacts of environmental pollution from fossil fuels and waste from petrochemical products. A lot of research has gone into exploring other alternatives to petroleum-based products which would be renewable as well as biodegradable and thus pose a lesser risk to the environment. Biopolymers are one such possible solution to the problem because they are typically biodegradable materials obtained from renewable raw materials. However, it must be noted that not all biodegradable polymers are biopolymers (i.e. produced from renewable resources). As one might expect, there are challenges related to biopolymers such as their limited rate of production, cost of production and the suitability of their properties.

Some of the first modern biomaterials made from natural biopolymers include rubber, linoleum, celluloid and cellophane. The latter two are made using cellulose, which is the most naturally abundant biopolymer and the most abundant organic material on Earth, making up a third of all plant matter. Since the middle of the 20th century, these human-made biopolymers were virtually all replaced with petrochemical-based materials. However, due to growing ecological concerns, biopolymers are enjoying renewed interest from the scientific community, the industrial sector and even in politics [1].

The main interest in biopolymers is to replace many of the everyday items which are made from petroleum products. This means that they will be required to exhibit similar, if not better, properties than the materials they replace to make them suitable for the various applications that they will be put to. Much of the property measurements of biopolymers have variance due to factors such as degree of polymerisation, type and concentration of additives, and presence of reinforcement materials. Information about the properties of biopolymers is not as extensive as for traditional polymers, but there is still a considerable depth of investigation into their physical, mechanical, thermal properties [2].

Some biopolymers have been identified to possess electronic and ionic conductivity and have thus been termed electro-active biopolymers (EABP). This has given them the potential to replace other synthetic materials. These biopolymers, which include starch, cellulose, chitosan and pectin, show a wide-ranging electrical conductivity between 10-3 and 10-14 S/cm [3].

Table 1. Physical, mechanical and thermal properties of some commercial biopolymers.

The production and processing of biopolymers

There are many different methods and techniques used to produce biopolymers. Since most of these polymers already exist in nature or are produced by natural organisms, these processes are often a matter of extraction followed by synthesis. They may include a combination of any of fermentation, filtration, compounding/granulation, hydrolysis, esterification, poly-condensation, oxidation and dehydration. Below is an example of the production process involved in making polybutylene succinate (PBS). 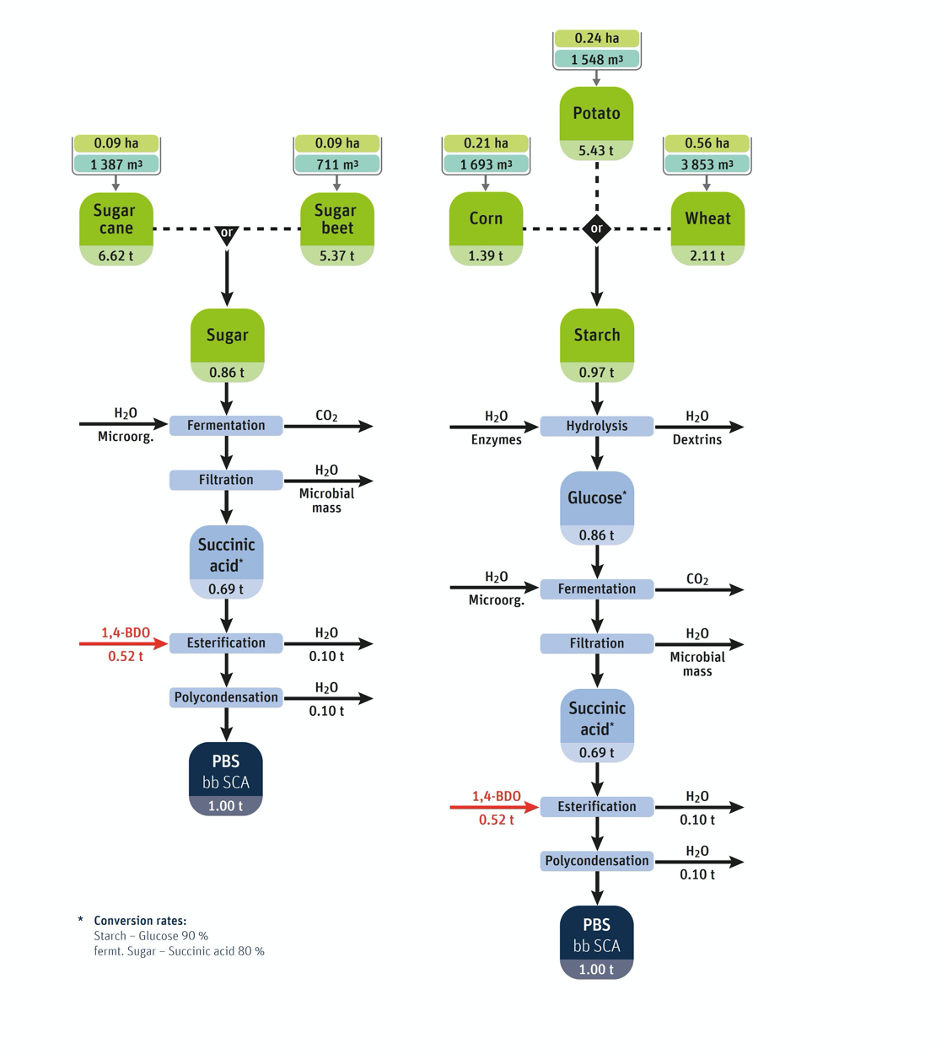 Biopolymers are used in many industrial applications as well as food packaging, cosmetics and medicine [4]. They can replace traditional petroleum-based plastics in many applications. Some biopolymers have also been applied to specific uses that other plastics would not be suitable for, such as in the creation of artificial tissue. These applications may require biocompatible and biodegradable materials with sensitivity to changes in pH as well as physicochemical and thermal fluctuations [5].

Biopolymers, in general, often exhibit poor mechanical properties, chemical resistance and processability in comparison to synthetic polymers. To make them more suitable for specific applications, they can be reinforced with fillers which drastically improve these properties. Biopolymers that have been reinforced in this way are called biopolymer composites. The table below is a summary of some common biopolymer composites, their properties and the industries in which they are already widely used.

Biopolymers can be classified broadly into three categories based on their monomeric units and structure:

Biopolymers can also be categorised by other criteria such as their base materials (animal, plant or microbial), their biodegradability, their synthesis route, their applications or their properties.

Examples of some commercially-produced biopolymers include [1]:

The future of biopolymers

The figure below shows the increase in bio-based polymer production between 2017 and what is estimated to be the case in 2022. Furthermore, it is projected that biodegradable biopolymers will constitute a larger percentage of biopolymer production in the coming years. It is clear to see that biopolymer production is on an upward trajectory. While it has a long way to go, if it is to take over from petroleum products, production is forecasted to increase from 2.27 million tonnes in 2017 to 4.31 million tonnes in 2022. This is at least partly a result of public demand and government regulations, which will continue to have a significant impact. 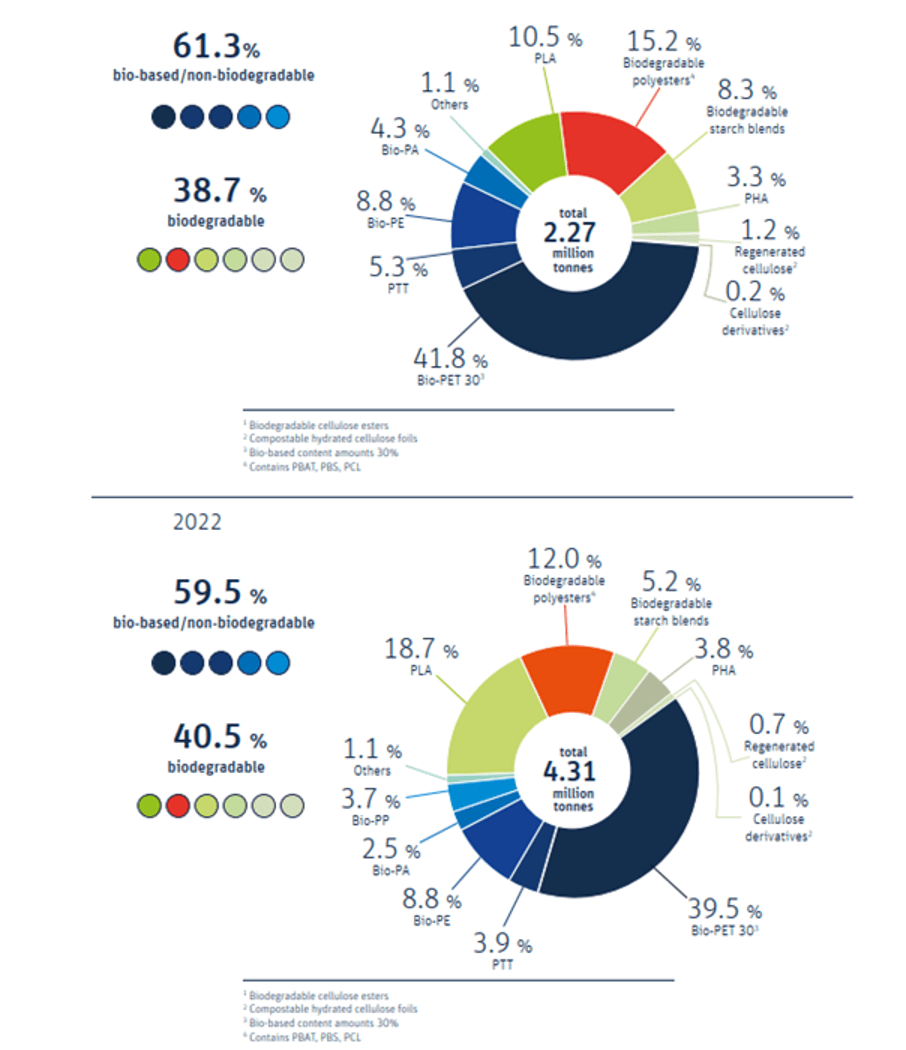 The following companies provide different biopolymer grades that can be found on Matmatch. You can contact the suppliers from the links below:

Elements Of Buildings In General